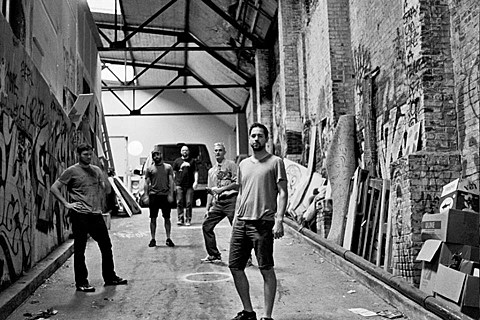 '90s-era emo vets The Jazz June are less than two weeks away from the release of their Evan Weiss-produced After the Earthquake (due 11/11 via Topshelf), their first album of new material in 12 years. We've already posted three tracks from it, and now we've got the premiere of a fourth, "Short Changed." Unlike their labelmates and fellow '90s band Braid, who's new record mostly sounds like classic Braid, there are few signs on "Short Changed" and the other singles that this is the band who made The Medicine. That album basically perfected The Jazz June's brand of emo, and presumably feeling like they had no more to say in that style, its followup and (up until now) final album Better Off Without Air was a much more experimental record.

Now they've reinvented themselves once again. "Short Changed," like previous singles "Over Underground" and "Ain't It Strange," is fuzzy indie rock that sounds more like it would have been on Merge in '92 than Initial Records in 2000. And since that early '90s indie rock style is fully back thanks to countless younger bands pulling from it, the new Jazz June stuff sounds totally modern. If you're already a fan of the band you probably don't need any convincing to listen to this, but if you're unfamiliar it's a fine starting point. Check it out below.

The Jazz June just headlined our CMJ showcase and they have a FFF Nites show coming up in Austin with Mineral, Knapsack and Into It. Over It. As discussed, this winter they'll tour with Field Mouse and return to NYC on December 27 at Saint Vitus. Tickets for that show are still available.