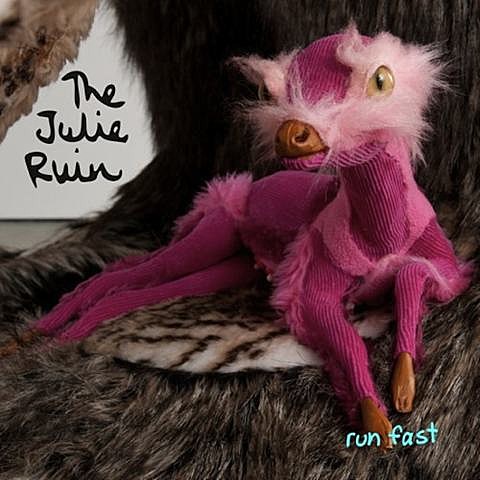 As mentioned, Kathleen Hanna's new group, The Julie Ruin, will release their debut album, Run Fast, next week (9/3). The record is somewhere in between Kathleen her two other groups, danceable like Le Tigre, but with more of a focus on guitars (shades of Bikini Kill). Connecting the dots: Hanna's voice, attitude, and intelligence -- all of which remain sharp. You can stream the whole thing now via NPR.

The Julie Ruin, who've played NYC a couple times this year already, play a sold-out NYC record release show at on September 3 at Bowery Ballroom with Swearin'. That's also the kickoff to their tour which swings back through NYC  at Music Hall of Williamsburg on October 25. Tickets for the MHOW show are still available.

Kathleen Hanna and Grimes were interviewed together before the WMAs last night and video of that, plus the video for The Julie Ruin's "Oh Come On," are below...

The Julie Ruin - Oh Come On

Grimes and Kathleen Hanna on politics and feminism