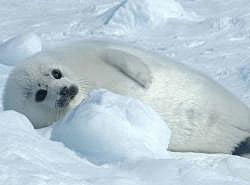 27 March 2006, Statement from Morrissey:
"We will not include any Canadian dates on our world tour to promote our new album. This is in protest against the barbaric slaughter of over 325,000 baby seals which is now underway.

I fully realise that the absence of any Morrissey concerts in Canada is unlikely to bring the Canadian economy to its knees, but it is our small protest against this horrific slaughter - which is the largest slaughter of marine animal species found anywhere on the planet. The Canadian Prime Minister says the so-called "cull" is economically and environmentally justified, but this is untrue. The seal population has looked after itself for thousand of years without human intervention, and, as the world knows, this slaughter is about one thing only: making money. The Canadian government will stream all of the pelts into the fashion industry and this is the reason why the baby seals are killed with spiked clubs that crush their skulls - any damage to their pelts is avoided. The Canadian Prime Minister also states that the slaughter is necessary because it provides jobs for local communities, but this is an ignorant reason for allowing such barbaric and cruel slaughter of beings that are denied life simply because somebody somewhere might want to wear their skin.

Construction of German gas chambers also provided work for someone - this is not a moral or sound reason for allowing suffering. If you can, please boycott Canadian goods. It WILL make a difference. As things stand, Canada has placed itself alongside China as the cruelest and most self-serving nation."

STREAM THE NEW MORRISSEY @ AOL MUSIC ("Ringleader of the Tormentors")