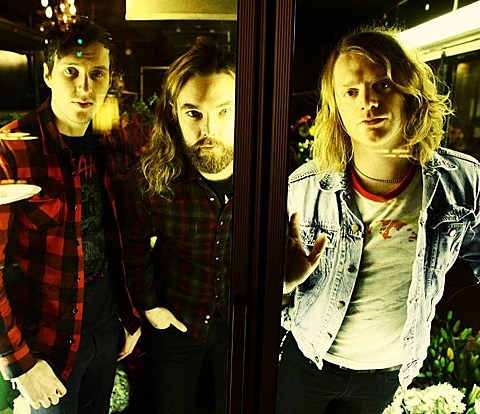 Wild Throne's new album Harvest of Darkness comes out next week (10/2) via Roadrunner (pre-order), and now the whole thing is here to stream. Like we said when we were talking about early single "Born To Die,' the album was produced by Ross Robinson, whose helmed maniacal proggy post-hardcore classics by At the Drive-In, Glassjaw and The Blood Brothers, and if you like those bands (or the first album by post-ATDI band The Mars Volta) you're almost definitely going to be into this. The whole album is pretty much in the realm of that single and it also includes "The Wrecking Ball Unchained" off last year's Blood Maker EP, which might still be my favorite song by them.

If you're the kind of person who's impressed by technicality and musicianship, you might not find many other new records this accessible with the same level of proficiency. The drumming and shredding guitars are so overly busy that they should be distracting, but they fit the songs perfectly, and lead wailer Josh Holland has one hell of a vocal range. It's heavy, complex and addictive. Listen (via Stereogum) below.

The band will be on tour soon with Red Fang and Whores, hitting NYC on October 10 at Palisades. Tickets are still available.