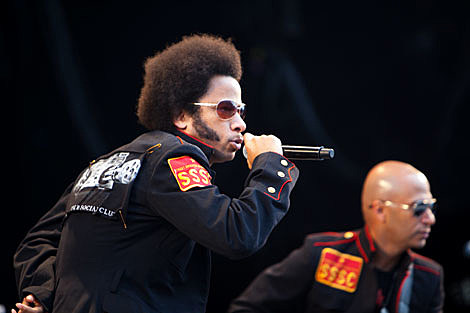 Street Sweeper Social Club, the opening band on the tour, shares perspective with both NIN/JA headliners: its worldview is cynical, and its brand of action resembles a party. A rap-rock super-group of sorts, it features Tom Morello, the guitarist formerly with Rage Against the Machine, and Boots Riley, a rapper in the Oakland, Calif., hip-hop group the Coup.

The band's brief set was apoplectic, full of fist-pumping slogans and seemingly cobbled out of spare parts from other projects. "This is not a performance, this is a meeting," Mr. Riley declared, trying out a different model of inclusiveness than either Mr. Farrell or Mr. Reznor would choose. "Thank you for attending." [NY Times]

The NIN/Jane's Addiction tour ended June 14th. Two days later (TODAY, Tuesday, June 16th), Street Sweeper Social Club will play a CD release show for its debut album at the Gramercy Theatre in NYC. Tonight's gig will feature opener Shinobi Ninja. Advanced tickets were still on sale last night, so we're guessing there will be some at the door too.

The show coincides with the release of their self-titled debut record on WM's Independent Label Group. Street Sweeper Social club will also be appearing Wednesday night on Late Night with Jimmy Fallon.

The band performed a cover of "Kick Out the Jams" with Trent Reznor at some of the NIN shows. A video of that, with other clips of SSSC, below...