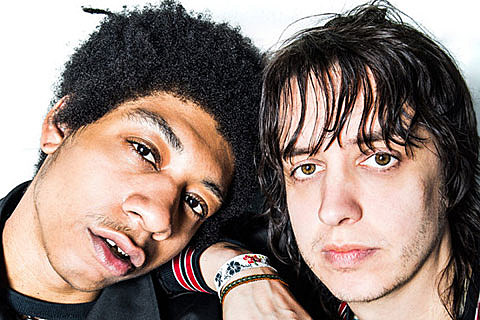 Tickets sold out pretty quickly for the Governors Ball pre-show The Strokes are playing up at the Capitol Theater on May 31, but four more super-VIP tickets are on sale now to the highest bidder:

Proceeds from this auction support The Capitol Community Fund. The Capitol Community Fund sends local teachers to the Rock n' Roll Hall of Fame for curriculum training - keeping rock n' roll in the classroom! HeadCount.org is a non-profit organization that uses the power of music to foster community and democratic participation. There is a sense of community felt in the heart of the music scene. It's a feeling that can't be described but you know you are part of something bigger. Together we can make a change and a difference!

Cerebral Ballzy, who are signed to Julian's Cult Records, open the Port Chester, NY show. Less than a week later you can catch that band's frontman Honor Titus reading and hosting poetry at Niagara in the East Village. CB's album "Jaded & Faded" will be released June 17. They'll be in Europe at the time touring with Fucked Up. They return to Europe to tour with OFF! in October. Their only other US dates at the moment are both Riot Fests. Everything is listed below.

The Strokes are also playing FYF Fest in LA in August.

Stroke Albert Hammond Jr. plays a few dates with Phoenix in June before headlining a Northside Festival show at Music Hall of Williamsburg in Brooklyn on June 13. The Strokes-influenced Drowners open that show. Tickets are still available.

P.S. congrats to Christina L., our winner of a pair of VIP passes to Governors Ball.

Check out the Governors Ball schedule (Julian Casablancas is on there too).

With The Strokes
May 31 Port Chester, NY Capitol Theater

Fucked Up also have US dates including a show at Irving Plaza.