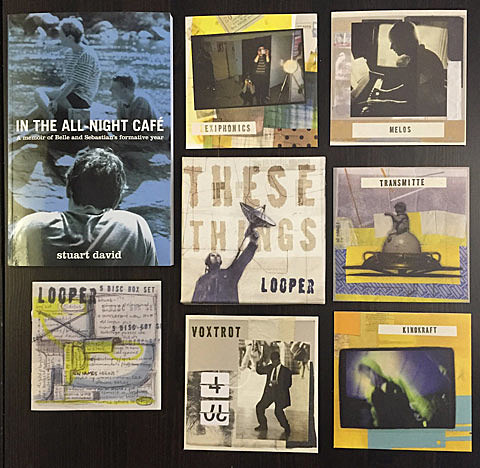 Stuart David has been making music as Looper since 1998 when he was still a member of Belle & Sebastian (he left in 2000). What started as a project with his wife, Karn, turned into a four-piece band and Looper released three albums between 1998 - 2002. (Looper's song "Mondo '77" was used in a lot of commercials and movies.) Then in the mid-'00s Stuart began suffering from chronic fatigue which all but ended his creative output. He's been getting better and 2015 makes a flurry of activity for him. He released The All-Night Cafe, a memoir of the early days of Belle & Sebastian, and a new Looper album, Offgrid:Offline which just came out via Mute. You can stream that in full, via Rdio, below.

That new album is also part of a career-encompassing Looper box set titled These Things, which rearranges the songs into five mixtapes categorized by genres. You can read more about that (and listen to it via Rdio) below. The box set also features liner notes by Charlatans frontman Tim Burgess. We've got a copy of both the These Things box set and The All-Night Cafe memoir to give away. Details below.

Voxtrot n. A hybrid form, combining elements of the 'lo-fi' pop song with the production and beats of hip hop and R&B. [from L vox: voice, Br trot: to move}

Transmitte n. A hybrid form, combining the 'lo-fi' pop song with arrangements and beats from all fields of electronica. [from Gl.* transmitter: send out signals, broadcast] *Glitch

Melos n. A form in which the song is central. Elements from 1960s Easy Listening, Pop and Soul are combined using contemporary techniques and production. [from Gk. melos: song, tune]