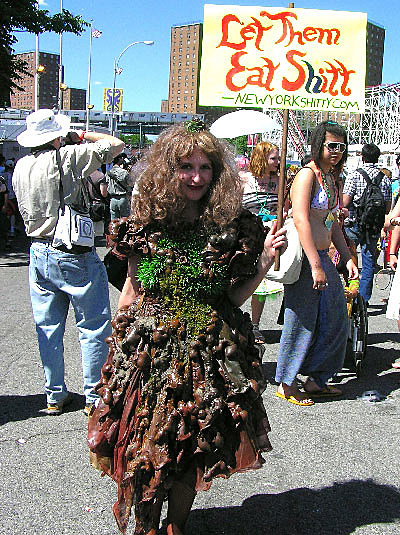 A Banker Street nightclub recently condemned by the local community board has now been shut down by the Department of Buildings -- but club lawyer Ken Fisher says the club has fixed whatever led to the failed inspection.

City documents did not reveal the specific offenses that caused Studio B's closure, but the Department of Buildings did on July 31 revoke the club's permit to host large crowds indoors, effectively shutting down the venue.

Fisher was steadfast about Studio B's readiness to reopen when, and if, Department of Buildings inspectors make a return visit. "All of the concerns have been met and we're waiting for further inspections," said Fisher, a well-connected former city councilman.

As a result of the closure, Studio B shows between July 31 and at least Aug. 19 have been relocated to different venues.... [Brooklyn Paper]

One of the angriest neighbors of all, Miss Heather (PICTURED ABOVE IN A DUNG COSTUME), runs the website NewYorkShitty.com. It is on that website that she runs through the the July 31st community board meeting where she presented evidence of why she thinks Studio B is a horrible place. One of the pieces of "evidence" she presented was a set of pictures and videos from a Yo Majesty concert that took place at the club. As you know, at least one member of the female lesbian rap group goes topless during their performances. They do so for reasons of good...

"I got stretch marks, and I'm fat, and I'm wildin,' " Jwl B [of Yo Majesty]., whose real name is Jewel Baynham, said in a phone interview. "But your boy 50 Cent does his show with his shirt off. Why can't I? God made me who I am, and I'm comfortable in it. I want people to know you don't have to look glamorous to be an inspiration." [IHT]

Kind of shitty then that Miss Heather saw fit to include Yo Majesty in her case, even if it wasn't the actual pictures that led to Studio B's closing and even if Studio B is keeping Miss Heather (and 'punk rock veteran' Caryn Rose who also blogs about it here) up at night.

Why exactly did Studio B close (besides the loss of cabaret license and whatnot)? MissHeather and one of her commenters also may have the answer for that. Not surprisingly, it looks like the rooftop garden opening was not a good idea.

Last Friday's show was moved to Southpaw. Keep checking Studio B's calendar for future changes. The above photo was taken by heartonastick in Coney Island.