The other day we [Gothamist] caught wind that Studio B in Greenpoint is on the market, but now we've received an email from JD Productions (who put on events there) stating: "It is with deep regret that we have to announce that the owner of Studio B has decided to close it's doors effective immediately." IMMEDIATELY! Okay, composure. Mr. John Davis's email continues: "It seems that after a great start, the club had struggled to keep promoters and develop their nights quickly enough. By the time I had put the Sunday Shoutin! event together, it was clear that the club was in deep trouble. I did make an attempt to buy the space from the owner but his asking price was completely unrealistic. This is the second time in 6 months he has suddenly closed the club and in doing so has damaged his reputation amongst patrons and promoters." ..........UPDATE: Mr. Davis sent out an email seconds ago stating "due to contractual agreements Studio B will be operating this Saturday and also for NYE and New Years Day, after which time it will cease operations. Sorry for any confusion but the club just informed me of these updates." [Gothamist]

Tonight/Friday's Joy party with Afrika Bambaataa has been moved to Europa. I'll keep you posted on other moves, like Little Boots's upcoming show for instance. ANOTHER UPDATE FROM FIXED:

"Studio B will not be closing after NYE. It will still be open for a few dates in January, including the Lindstrom date that we have on 1/29. We're still working out where the 2/6 Little Boots date will be moved." - FIXED

Thanks to all who emailed about this. Tonight's flyer below... 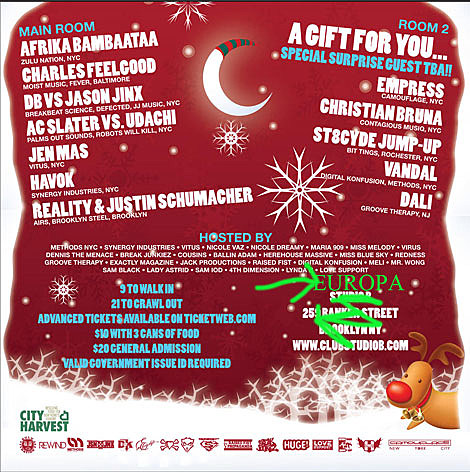 For more about Saturday, check out the Week in Dance.