Sub Pop is now confirming a lot of the rumors and then some..... 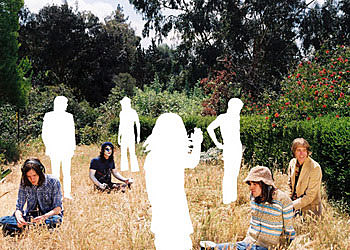 GREEN RIVER, FLIGHT OF THE CONCHORDS, IRON & WINE , WOLF PARADE and OTHERS with MORE TO BE ANNOUNCED IN THE COMING MONTHS

SEATTLE, WA - In unabashedly conspicuous celebration of 20 years of not going out of business (sometimes only barely), Seattle's Sub Pop Records will gather past and present label-mates for a series of events, including a two-day festival at Marymoor Park on July 12 & 13 and a comedy show on July 11 at Seattle's Moore Theatre. Proceeds from the sale of tickets will go to support beneficiaries of each participating act's choosing. Tickets go on sale April 26 at 12 PM Pacific at SubPop.com and all Ticketmaster locations. More ticket information provided below.

About SP20
Though Bruce Pavitt had been using the title SUBTERRANEAN POP since sometime in '79 for fanzines, cassette compilations, radio shows, and the like, somewhere along the line he and co-founder Jonathan Poneman decided that April 1, 1988--the day they quit their jobs and rented a tiny office in the Terminal Sales Building in Seattle--was the day Sub Pop Records was born. To celebrate the label's twentieth birthday, Sub Pop will release a series of re-issues starting with Mudhoney's Superfuzz Bigmuff: Deluxe Edition (May 22, 2008), launch a limited run of the Sub Pop Singles Club, and throw a series of over-the-top birthday parties for itself this summer.

SP20 Festival
The SP20 Festival is happening July 12 & 13 at Marymoor Park just outside of Seattle in Redmond, WA. In addition to reunited bands, acts currently on the label's roster, and everything in between, the festival will also host a half-pipe featuring both Nike and Girl + Chocolate sponsored skaters. While the full day-by-day line-up will be announced in the coming months, the festival will include:

Proceeds from ticket sales will benefit a variety of charities chosen by both Sub Pop and each act performing. Ticket information provided below.

SP20 Comedy Show
The SP20 activities will commence with a comedy show on July 11 at The Moore Theatre. Among the performing comedians are Sub Pop artists Eugene Mirman and Patton Oswalt, label friend and fan Todd Barry, and special guests.

SP20 Festival & SP20 Comedy Show Ticket Information
Discounted $30 single-day or $50 two-day passes to the SP20 Festival go on sale Saturday April 26 at 12 pm Pacific at SubPop.com, at Ticketmaster outlets, at Ticketmaster.com or by calling 206.628.0888. Tickets can also be purchased at the Marymoor box office Monday through Friday 9:00 am to 5:00 pm, with all service charges going to benefit the parks department. Ticket prices will increase to $35 single-day or $60 two-day passes on May 10.

Proceeds from ticket sales will go to benefit a variety of beneficiaries, chosen by both Sub Pop and participating bands.

Special SP20 ticket combinations and packages will be available exclusively at SubPop.com.