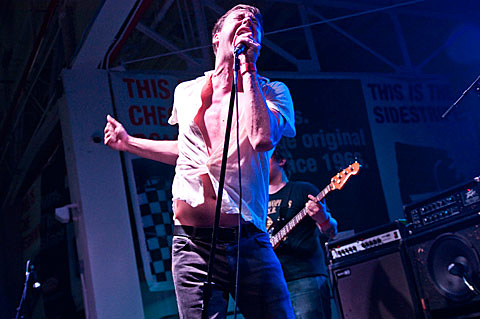 Pissed Jeans will headline a stacked Sub Pop CMJ showcase joined by appearances from King Tuff, METZ, Poor Moon, Daughn Gibson and Debo Band at Knitting Factory on October 18. Tickets are on sale or you can get in with your CMJ badge. The show is an uncharacteristic third NYC show for Pissed Jeans this year, whose last appearance was with Ceremony at LPR earlier this year (pics/video) and just a few weeks before that, at MHoW.

King Tuff, who recently played FYF in Los Angeles, will be in the NYC area for a few days with The Intelligence (who is at Maxwells on 10/17 -tickets).

Speaking of shows over Labor Day weekend, METZ recently played a pair of NYC shows in that stretch. The band is prepping to release their new LP on Sub Pop.

Meanwhile, newish Sub Pop signees Poor Moon released their debut album at the end of August (download a couple MP3s above) and will be touring most of August opening for Beach House. (No NYC show.) Their tour dates are below, along with videos from some of the rest of the Sub Pop showcase line-up.