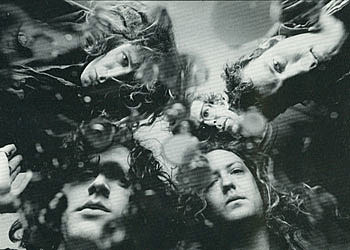 As previously reported, Sub Pop is celebrating their 20th birthday and there will be a party.....

According to a reputable source very close to the festival, who was plied with booze until he let the cat out of the bag, plans for Sub Pop's 20th Anniversary Festival are in full swing. The dates are set, the location has been chosen and bands are being booked. We'll tell you all we know below. First, though, it's important to note that the festival is just one (large) step in Sub Pop's celebratory waltz.

Hundreds of freeloading music fans and industry folk packed Hattie's Hat on Tuesday night to kick-off the record label's year-long celebration with free drinks, shop-talk, chocolate eclaires and a possible Gary Busse citing (word has it that photos were taken ... we're still waiting). VH1 honored Sub Pop the day before (on the label's actual 20th Anniversay) by posting 20 years worth of Sub Pop music videos. On the label's side, there is word that the much-loved Singles Club will make a return appearance. And then there of course will be more of the high quality releases the label has been giving the world for 15 (nonconsecutive) years.

But the festival will be the manifestation of the celebration. And here, in bullet points, are the details we squeezed from our source (their accuracy is questionable, as there were free drinks):

* The festival will officially take place July 12 & 13 at the 640-acre Marymoor Park in Redmond, with performances going both day and night

* Bands performing will cover the history of the label's roster, including two reunion performances. One will be the much-ballyhooed return of Green River. The second, according to this recent news story from the Denver Post, will be the Fluid, Sub Pop's first non-local signing from way back in 1985.

* There will likely be a Sub Pop comedy night at a yet-to-be-named venue separate from the music festivities.

* There could possibly also be some shows at clubs around Seattle leading up to the festivities, though details on this were very vague.

Reached for comment on Monday, April 7, Sub Pop would not confirm any of the above information, stating that "While plans for Sub Pop's 20th anniversary celebration are underway, neither a location nor a lineup are confirmed and cannot be announced at this time." [Seattle Sound]