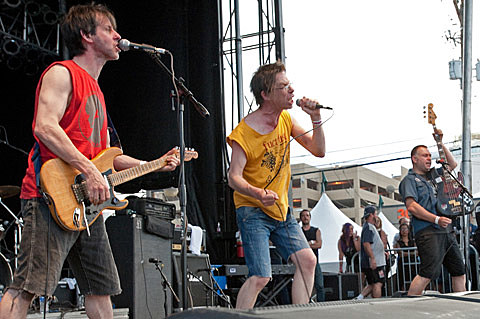 Old school UK anarcho-punks Subhumans are heading stateside this July, playing dates in the US and Canada with Philadelphia's folkish punks Mischief Brew (who just played Brooklyn's Grand Victory -- did you go?). The tour includes a stop in NYC to play Le Poisson Rouge on July 27. Tickets for that go on sale Friday (5/2).

Before that they'll be in Philadelphia for  This is Hardcore, playing an afterparty on July 26 at Volatage Lounge with Nightbirds (tickets). As mentioned, Philadelphia's This is Hardcore fest is a doozy that features a variety of seminal punk, hardcore and otherwise heavy acts, including Converge, Title Fight, Killswitch Engage, Nails, Power Trip, Madball and many, many more.

All Subhumans and Mischief Brew dates are listed, including some Mischief Brew gigs before their joint tour starts, and a stream of Subhumans 1983 debut album The Day the Country Died, below...