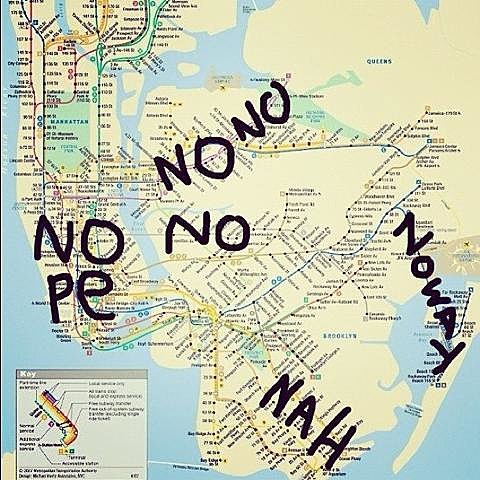 Governor Andrew Cuomo announced that the MTA's subway, bus and commuter rail services will be free for today and tomorrow, to encourage the use of mass transit as the region slowly recovers from the devastating effects of Hurricane Sandy.

The free service began just after midnight Thursday and will last until 11:59 p.m. on Friday, and will allow for free rides on the NYC Subway and Bus network, Long Island Rail Road, and Metro-North Railroad. Free travel will also be available on Access-a-Ride.

"The gridlock we experienced yesterday shows that the New York metropolitan region is in a transportation emergency," Governor Cuomo said. "To get people out of their cars and onto mass transit, I immediately authorized the MTA to suspend transit fares through the end of the work week."

So buses and subways are today (11/1) and Friday (11/2), and all reports on TV show this system currently running smoothly.

Of course, it doesn't do you much good if you live (or need to get to) below 34th St in Manhattan as power is still out. But ConEd has just announced that they hope power in NYC will be restored everywhere by Friday or Saturday.

Some subway lines, like the G and the Q, aren't running at all. Buses, however, are up and running on a mostly regular schedule. A map of the current Subway situation is here and NY1 has details on the myriad MTA service changes.

And LaGuardia airport reopened (the last of the NYC airports to do so after Sandy hit) this morning after being closed since 10/29. Flights began arriving at 7 AM this morning.

Meanwhile a lot of events are still being cancelled. Check out our list of things not happening tonight (11/1).