Planetarium, a collaborative album co-composed by Sufjan Stevens, Bryce Dessner, Nico Muhly, and James McAlister, will be released June 9 via 4AD. The project began as a commission for Muhly by Dutch concert hall Muziekgebouw Eindhoven, which he enlisted the others to help him work on. The live performance debuted in March of 2013 at Brooklyn Academy of Music, complete with lasers, an orb suspended above the stage, horn players and a string quartet. A few years later, Stevens, Dessner, Muhly, and McAlister returned to the material to make an album:

Returning to the raw material in 2016, Stevens and McAlister reversed their typical process, taking recordings of the live show and adapting to the studio. “We had recorded all the arrangements and the live parts in a studio after our last performance,” says Stevens, “so years later when we all kind of settled down, we said, ‘let’s open Pandora’s box.’”
Stevens and McAlister worked to arrange Muhly’s symphonic framework and Dessner’s guitar virtuosity alongside their own lyrics and beats. Stevens became the driver behind the “song” part of the song cycle, his unique voice providing a clear and coherent center of gravity for the whole project.

Watch a video of "Saturn," and take a look at Planetarium's tracklist and album art, below.

In related news, Carnegie Hall's "Steve Reich at 80" celebration is currently underway, including the Steve Reich-curated Three Generations series, which will explore "how the language of composition changed from the mid–20th century to the present day by pivoting from serial atonal music toward a more harmonic and rhythmic style led by Reich and his peers." Bryce Dessner and Nico Muhly's "Three Generations" show happens April 26 (tickets). More information on that and other "Three Generations" shows here. 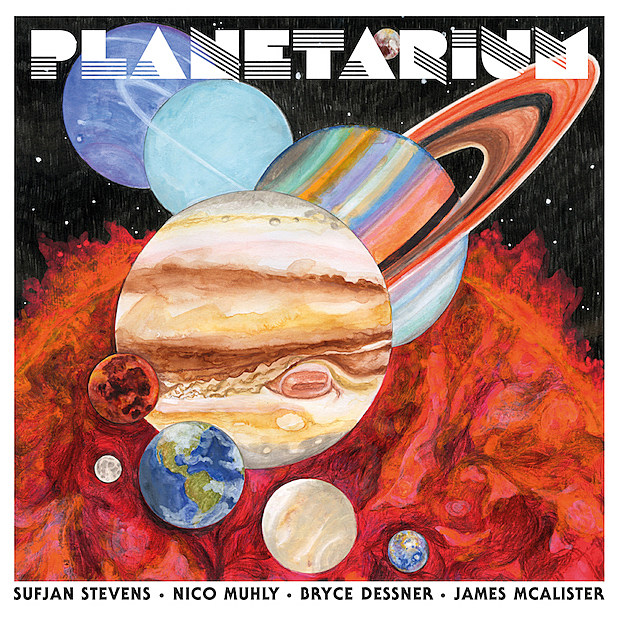