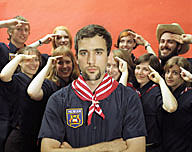 "As always, artistic director Philip Glass is gathering an amazing line-up of artists for the concert. The show presents well-known performers from around the world and features unique collaborations between them. To date, confirmed artists include Philip Glass, award-winning composer, well known for his gripping melodies which enchant listeners worldwide; Laurie Anderson, another long-time favorite of the Benefit Concert, who will be gracing the stage with her wildly creative musical talent; Damien Rice, an amazing artist who will be performing for the first time at the event, whose haunting and melodic music can be heard on the soundtrack of the movie Closer, in the title song, “The Blower’s Daughter”; Sufjan Stevens, another newcomer to the show, a talented, intelligent artist whose work brims with heart-wrenching melodies and orchestration; and singer, pianist, songwriter, arranger and producer Allen Toussaint, one of America’s greatest musical treasures and a New Orleans native who has had a tremendous influence on American music reaching deep into the idioms of rhythm and blues, pop, country, musical theater, blues, and jazz.

There will be more artists performing at the show so check the website regularly as all new updates will be posted as soon as they are confirmed. As many of you may already know, there is a wonderful reception after the concert, where the artists, honorary chair, and all of the benefit concert package ticket holders congregate for a buffet dinner party. Tibet House looks forward to seeing you at Carnegie Hall on March 1st, 2006."