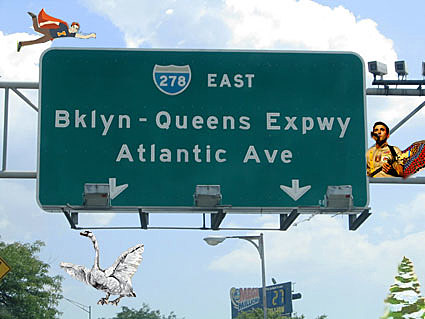 On November 1, 2 and 3rd Sufjan will be pairing orchestrated selections of both new and old material with the 25th Next Wave Festival commission/world premiere of The BQE-a symphonic and cinematic exploration of one of New York's least celebrated monuments: the Brooklyn-Queens Expressway.

Robert Moses' controversial 11.7-mile roadway tears through neighborhoods in Brooklyn and Queens with the brute force of modern urban planning, and in Stevens' hands becomes an evocation of the intersection of intimate experience and the American Dream. Merging a virtual road trip shot on film with a live band and orchestral ensemble, The BQE discovers abstract patterns and stories in the snaking traffic, potholed pavement, billboards, badly marked exits, and beautiful city views, revealing what happens when Manifest Destiny converges with urban blight.

The Brooklyn Academy of Music (BAM) has announced the selections for the 25th Next Wave Festival, to run October 2-December 16, 2007

Subscriptions to the 25th Next Wave Festival go on sale to the public on June 18. (Friends of BAM and Subscriber Priority Sale begins June 11.) Click here for more information on ticketing.

La Blogoteque's new video of Sufjan performing "The Lakes of Canada" below....

#50.2 - Sufjan Stevens (MusicNow) - The lakes of Canada
Uploaded by lablogotheque