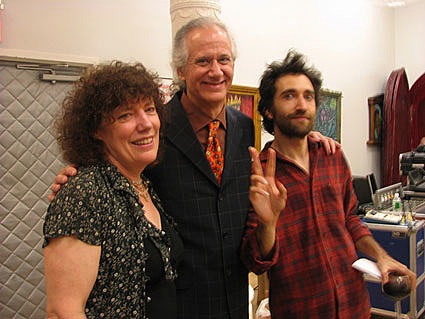 This Sunday, Oct. 28, Sufjan Stevens will premier a couple pieces from his new orchestral project "The BQE" on David Garland's radio show Spinning On Air. That'll be heard Oct. 28, 7- 8 pm on WNYC-FM 93.9 in New York City, and online. David will also interview Sufjan. David also threw a preview up on YouTube....

Songwriter Sufjan Stevens has always shown a fascination with orchestral color and sound in his recordings, and his popular albums of songs usually include some purely instrumental pieces. Now he brings an orchestra of eleven players into the WNYC Studio for a live performance of pieces from his new instrumental composition "The BQE." Sufjan talks with host David Garland about the music and the ideas behind it, which include the story of the Brooklyn Queens Expressway, the consequences of urban planning, and hula hoops. This music, scheduled for sold-out performances in November in the Brooklyn Academy of Music's Next Wave Festival, receives its premier on Spinning On Air!

I wonder if Sufjan sings at all in the BQE thing.

David Garland recently celebrated 20 years on the air at Joe's Pub. There are pictures, and you can listen to it.

See what else is coming up at the Brooklyn Academy of Music.