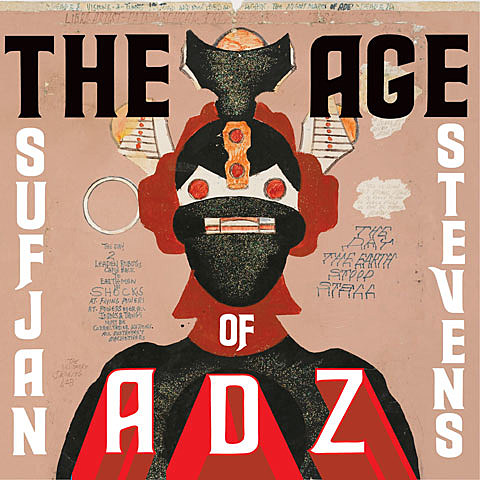 "Sufjan Stevens is set to release The Age of Adz, his first full length collection of original songs in five years, October 12 on Asthmatic Kitty Records. The album is available for pre-order now until September 25, with pre-orders receiving music digitally two weeks prior to the physical release date. The Age of Adz comes on the heels of Stevens' All Delighted People EP, available for purchase now from most digital stores, and his 2009 film and musical suite The BQE. Stevens is planning a North American tour of large, elegant venues-including two nights at New York's fabled Beacon Theatre and The Wiltern Theater in Los Angeles-in support of the new record. With a dozen dates already sold out, Stevens will tour with his large ensemble performing alongside projections. "

The retun of Sufjan Stevens started with a tour announcement which was followed by an instantly-available EP, and now this.

More album information including the tracklist (the 11th song on the album is over 25 minutes long), along with updated tour dates that list which shows are sold out (tickets are still available for Philly), below...

"The Age of Adz (pronounced "odds") differs from Stevens' previous works in its lack of conceptual underpinnings. The album relinquishes the songwriter's former story-telling techniques for more basic proclamations unhindered by concepts: there are few narrative conceits or character sketches, no historical panoramas, no civic gestures, no scene, setting, conflict, resolution or denouement. Rather, the themes developed here are neither historical nor polemical, but rather personal and primal: love, sex, death, disease, illness, anxiety and suicide all figure in the songwriting.

The title The Age of Adz is a reference to the apocalyptic art of Royal Robertson (1930-1997), a Louisiana-based sign-maker (and self-proclaimed prophet) who suffered from schizophrenia. Robertson's work depicts his vivid dreams and visions of space aliens, futuristic automobiles, eccentric monsters and signs of the Last Judgment. Portions of Stevens' album use Robertson's work as an idealistic springboard and a selection of Robertson's drawings (his primary media were poster board, magic marker, and glitter) appear throughout the album art." - Asthmatic Kitty