Sufjan Stevens at Prospect Park in 2011 (more by Jessica Amaya) 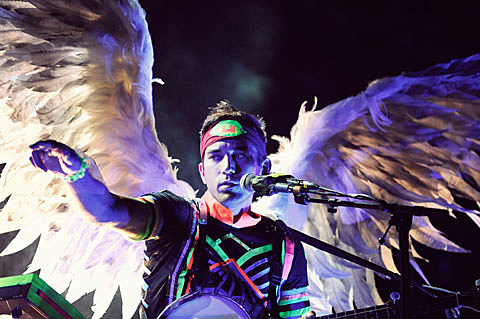 Sufjan Stevens will be presenting the world premiere of his new piece, Round-Up, in Brooklyn at BAM from January 20-25, part of BAM's 2015 Winter/Spring Season. Here's the premise:

In this BAM commissioned work, shown on the Steinberg Screen, Stevens turns his gaze to the rodeo, in all its bull-riding, calf-roping, and barrel-racing glory. With slow-motion footage shot by sibling filmmakers Aaron and Alex Craig at the 2013 Pendleton Round-Up in Oregon--and featuring Stevens on electronics and new-music ensemble Yarn/Wire performing piano and percussion--Round-Up is a musical and cinematic portrait of a classic American tradition.