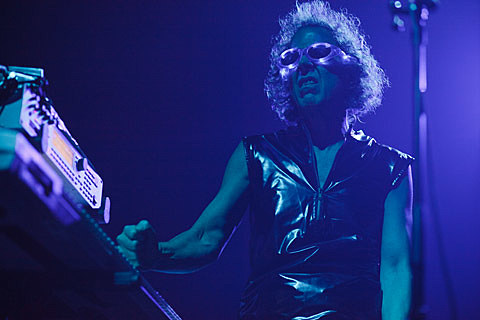 One half of pioneering New York synth punk duo Suicide (Martin Rev) recently played Webster Hall opening for Zola Jesus, and now he and his partner in noise Alan Vega have scheduled a headlining Suicide show at that same venue for March 7. Tickets to see these legends in action go on sale at 10 AM on Friday (12/12).

One of Suicide's songs was recently performed by another CBGB veteran, David Byrne, at Arcade Fire's Barclays Center show in August which CBGB vets Television opened. Meanwhile, the same month as that Suicide show, David Byrne will be celebrated at Carnegie Hall.

To see some newer bands who owe a bit to New York City rock history at Webster Hall, head to the the Parquet Courts/PC Worship show there this Thursday (12/11). That's sold out.

Listen to some Suicide below...