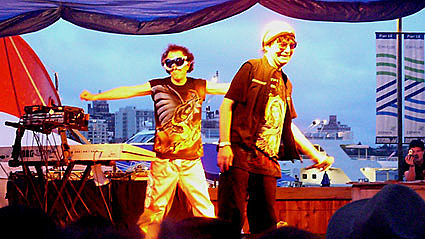 Last night I was able to catch one of the greatest, most influential (for me) bands of all-time, Suicide, playing a rare live show in their home city. I can barely put into words how cool this was. I mean, fucking Suicide man! Unfortunately, it was a part of the summer-long South Street Seaport free Friday night concert series, which meant that it had that amazing mix only South St. Seaport can attain of disgusting lawyers and bankers from the nearby Financial District, tourists dying to hit up Pizzeria Uno, drunk people. But, whatever, Suicide! The boys were in good form, Alan Vega (real name: Alan Bernowitz) doing that aging punk Elvis thing, Martin Rev providing the music, as the night wore on they got better and better. They played for about an hour and 10 minutes, cleared out a good portion of the crowd and made my month. [Pound for Pound]

And for an interesting review of the TheDeathSet's opening set, keep reading.... 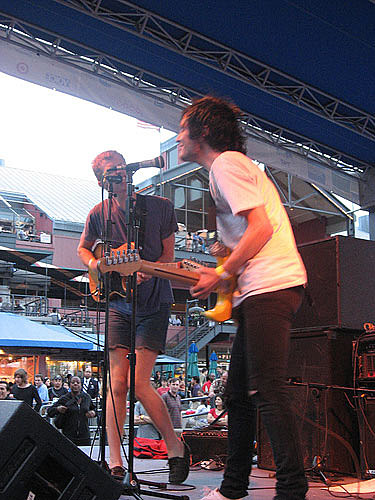 So there were all these 40/50 year old Suicide fans. To be fair some were younger than that. Anyway, while the Death Set were on most of them were sitting there with their arms crossed. Blankly staring at the guys while they played, and avoiding clapping after songs. There were some Death Set fans speckled throughout the crowd. They mostly seemed antsy about being contained from jumping around in a sweaty mess like any other Death Set show in Brooklyn or Baltimore. They were just bobbing their heads in place and loudly applauding. It was pretty depressing to watch until about 4 kids up front started hopping around in an improvised mosh pit. Within seconds about 20 kids from all different areas of the crowd swarmed to front center and joined in (to be fair again, a couple of the cooler old dudes did so as well). It was like watching people run through corn stalks. At that point the Suicide heads started getting angry. Yelling at people to stop having fun.
Calling out "BORIIIING" during breaks in the set. But it was fine.
People kept on bouncing around to the remaining half of the Death Set set. Just sad to see fans of a band that was at their time making cutting edge music getting so agro at some kids having fun to another band that is not so easy to digest. Anyway, the guys seemed to start enjoying themselves once people started moving around. If anything it was good to finally see them play a show with no technical difficulties a la Glasslands water baloons or opening for Matt & Kim and Parts and Labor last month with PA problems.