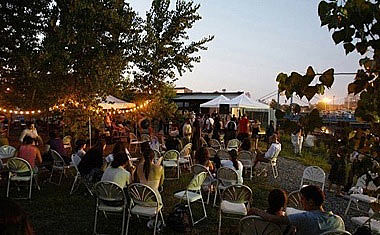 Despite the rumors, The Yard, an outdoor Brooklyn venue along the Gowanus Canal, will be open for events this summer. There will be one-off shows like Mike Ladd on May 24th, Stereo Total on May 31st and AudraRox on June 7th, AND there will be dancing and food every Sunday from 3-9pm. More details and the whole 'Sunday Best' lineup is below...

Sunday Best! takes over The Yard, a leafy waterside lot on the Gowanus Canal for a nice, mid-afternoon barbecue. It's no ordinary weenie roast, though. The bar-b's organic and resident DJs Justin Carter, Eamon Harkin and Doug Singer play alongside some of the finest DJs to ever take on a back yard...

June 01
King Britt - This party with the former Digable Planets member is FREE!

July 27
The Wurst BBQ - My Cousin Roy and Doug Lee serving up sausages!

About the Residents
Eamon, a full-blooded Irish New Yorker, is a resident of Studio B's epic FUN party as well as DJ booth partner to Afrika Bambaataa from time to time; Doug, one half of the brothers'brothers duo, introduced New York party people to the Water Taxi Beach with Rebound and maintains a residency there at The Beach Party; and Justin Carter is a DJ and man-behind-the-scenes at such New York institutions as Nublu, APT, Easy Lover, and that same Saturday night Beach Party that Doug plays.

food Organic and mostly local fare provided by Kelly Geary of Sweet Deliverance
booze You have to be 21 to drink it, but we'll be selling it at the bar
ages All ages
time 3p - 9p
cover $8, except for on June 1, when it's FREE!
rsvp rsvp@sundaybestnyc.com

N, R trains to Union. West on Union. Left on Nevins. Right on Carroll. Just over the bridge.

The Yard is at 400 Carroll Street between Bond and Nevins, Brooklyn