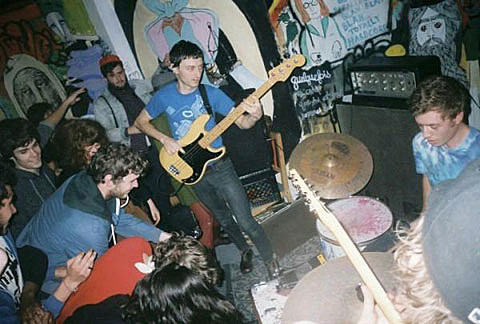 Ok it's a busy weekend of shows. It always is, I always say that. But this TWII is seems more packed than most. No doubt, it is time to try a little harder in the band name department. Especially when it comes to beachy ones of which, anyone who even casually checks in with Pitchfork can tell you, there are too many of. Adding to the band name clutter and confusion are Oakland, CA's Summer Blondes who are visiting us this weekend. They play tonight (7/21) at Shea Stadium, a house party in Bushwick on Friday (7/23) and Bruar Falls on Saturday.

Given their name and hometown, it may not surprise you learn that Summer Blondes (who are dudes, maybe that's a surprise) make low-fi surf garage rock. That said, and lack of moniker originality aside, I like these guys. Alternating between laid back instrumentals and blown-out rockers (and some that most interestingly fall in between), there's more musicality going on here than you might expect. Also: their drummer is a manic powerhouse, and their singer/screamer appears to be a little nuts. No records out yet, but the band do have CDR demos they've been handing out at shows so keep an eye/ear out for those. 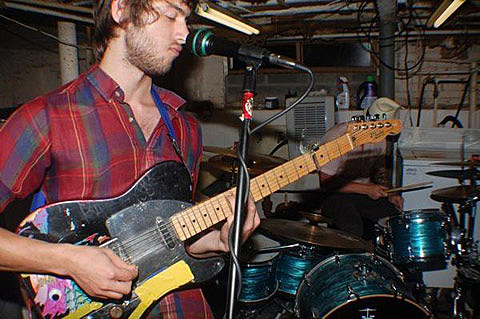 Also playing that Saturday Bruar Falls show are Nashville's Pujol who are on JEFF the Brotherhood's Infinity Cat label. Is it just me or does it seem like there's a Nashville band in town every weekend? Bye bye JEFF and Heavy Cream, but hello Pujol. You may know him from Wizardz or MEEMAW if you follow the Nashville scene closer than I do. Like all the bands on the Infinity Cat roster, Daniel Pujol makes poppy, punky party rock that is hard to dislike.

If you can't make the Bruar show, Pujol also play Silent Barn on Sunday night and that one's with The Beets, Knight School, and Moonmen on the Moon, Man. Check out a couple Pujol music videos at the bottom of this post with all dates.

Moving from Nashville to Memphis, as mentioned in the previous post, we've got Magic Kids in town for a couple of show. Read more about that there. 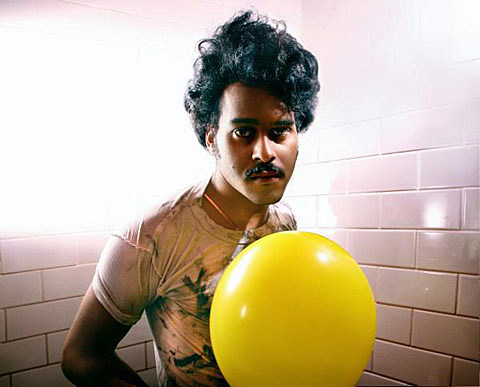 For being in a band who have never done a whole lot for me one way or the other (there, I admit it), I like every band on Chris Taylor's Terrible Records.  The label's next release is the debut from locals Twin Shadow which will be out September 28. The brainchild of stylish New Yorker George Lewis Jr., Twin Shadow mix a variety of '80s influences into a pretty distinctive sound. For example, on "Slow," which you can download at the top of this post, you can hear a little Joy Division in the drumbeat, and the arpeggiated, delay-effected guitar is straight out of The Chameleons or U2's playbook. You can even hear a little Prince ("I Would Die 4 U") and Bruce Springsteen ("I'm on Fire") in there too. But he makes it all into something new.

Lewis, who sounds like The Blue Nile's Paul Buchanan but looks more than a little like Phil Lynott, is a charismatic cat on stage... see them now in small places while you can. Twin Shadow play Cake Shop Thursday (7/22) and Coco 66 on Friday (7/23). Both shows are with Hooray for Earth. 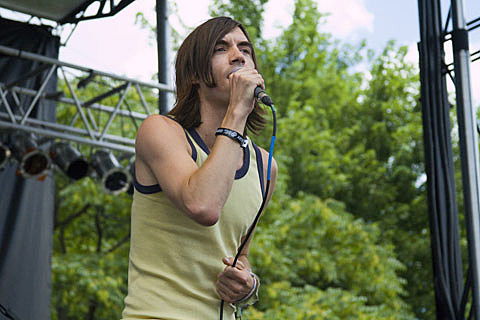 And last but certainly not least, this Friday's edition of the Seaport Music Festival might just be the biggest of the Summer with Free Energy, Best Coast and Loose Limbs. Best Coast couldn't be any hotter right now with just about every media outlet writing about their debut album which comes out next week. It's a fine showcase for Bethany Cosentino's natural way with a melody, her great Loretta Lynn-ish voice, and her ability to rhyme the word "crazy." Much has been made of the single-minded lyrical themes -- a very bad breakup, weed -- but I prefer to focus on those melodies and her voice which can stop you in your tracks. It a gorgeous record in that respect, and Best Coast, now with full-time drummer Ali (swiped from Vivian Girls), have been good the three times I've seen them this year (twice at SXSW, once at Knitting Factory). It's also Best Coast's only NYC show (not counting the invite-only one last night) until they return at the end of September. All tour dates are below.

Headliners Free Energy should be right at home on a big outdoor stage, as their album is loaded with festival-ready fist-pumping rock anthems, stealing the best bits of Thin Lizzy, ELO and '80s stadium rock. Perfect summer music, that goes down easier than Bud Light. Get there early for trio Loose Limbs (who are signed to Seaport Music Records), and I'll be DJing a second week in a row. Will I play The Darkness? Seems likely.

That's gonna do it for this edition. There's some more daily picks of things worth checking out that I didn't cover above:

Montreal's Parlovr and Suuns play the first of their two shows this week at Mercury Lounge and both are worth catching (and one is now signed to Secretly Canadian). It's an early show.

You could make a Montreal night of it by then heading over to Home Sweet Home for the Wierd party where Automelodi play at Midnight.

Sludgy noisemerchants Total Slacker (check out new MP3 "Cops Freak Me Out" at the top of this post) and funky Ava Luna (who impressed during Northside) headline a bill at Glasslands that also includes Mala Strana and Baltimore's loud Weekends.

Diehard, who'll have a new EP out soon of catchy, classic-sounding indie rock,  at Union Pool with The Waylons and World War. 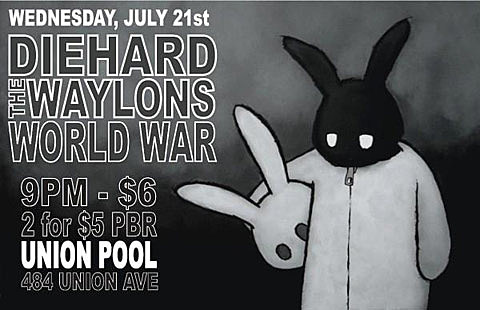 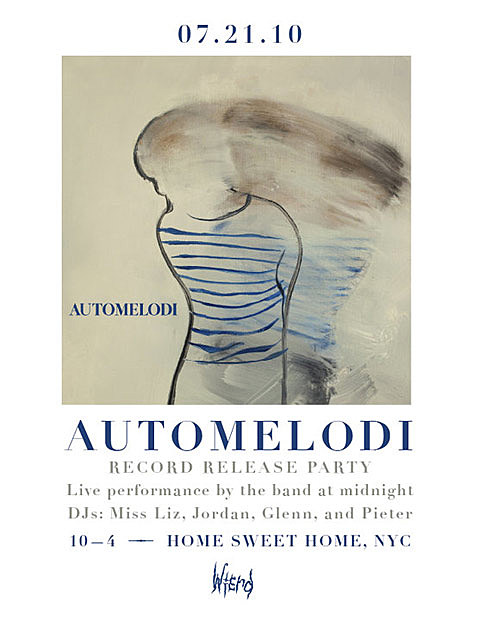 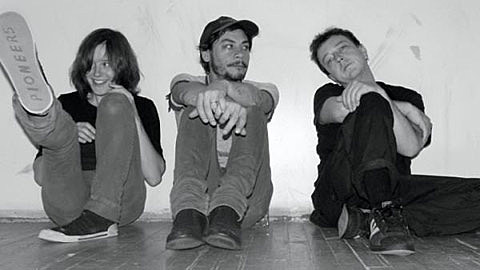 At Bruar Falls you can check out Pioneers of Seduction who describe themselves as "Pretty heavy for Brooklyn, pretty mellow for Norway." Their album was recorded with Steve Albini. Also playing: Pet Ghost Project.

Australia's Midnight Juggernauts, who make widescreen dance rock, play their first of two area shows this week at Santos. This one is with Health which makes it a pretty hot ticket. Midnight Juggernauts also play Brooklyn Bowl on Monday (7/26) with Teengirl Fantasy.

And if you'd rather go see people talk about music, head to Matchless for The Greatest Three Minute Record Reviews Ever. A one-year birthday party for blog Vol. 1 Brooklyn, such music writers as former Idolator editor Maura Johnston, Rolling Stone's Rob Tannenbaum will read original works about records they love (or hate). 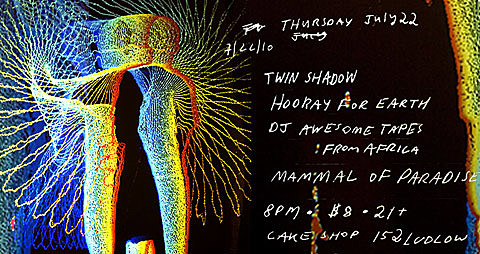 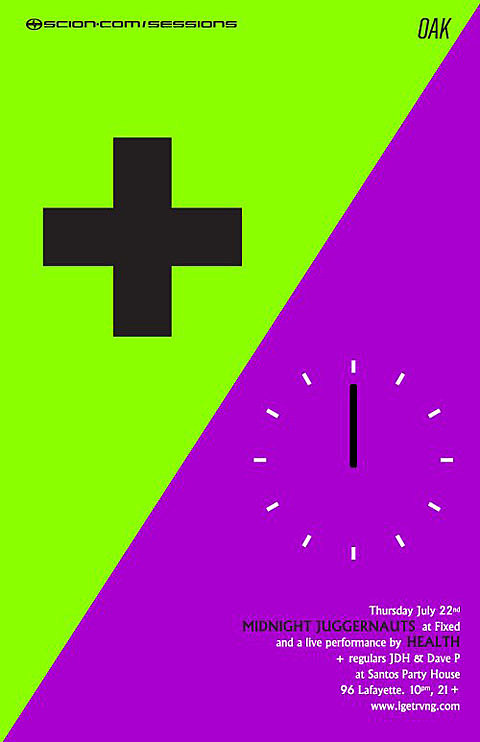 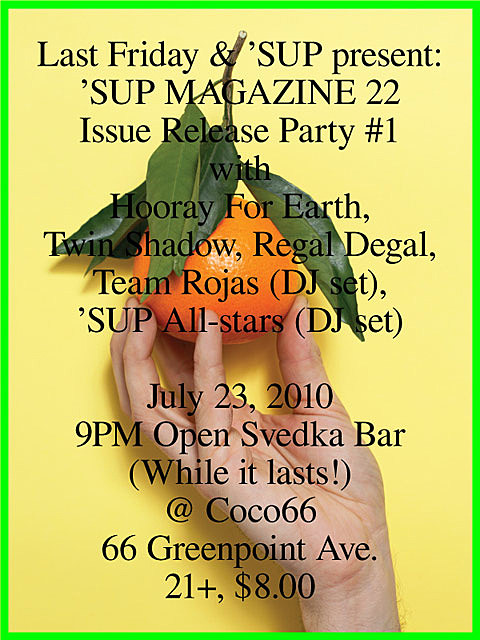 If you're going to Coco 66 for Hooray for Earth and Twin Shadow, do go early to see openers Regal Degal. I've called them art-punk before and I think that's pretty accurate. They've got a new song on their website, "Loris Night," that has a definite Wire-y vibe. If you can't make it that early, Regal Degal play again later Friday night at a house party in Bushwick with Summer Blondes (more info here).

Violens are about to head out on tour with MGMT but play Bowery Electric tonight with Animal Collective wannabes Keepaway. Violens long-overdue debut album will be out in November but you can download new track "Acid Reign" at their website.