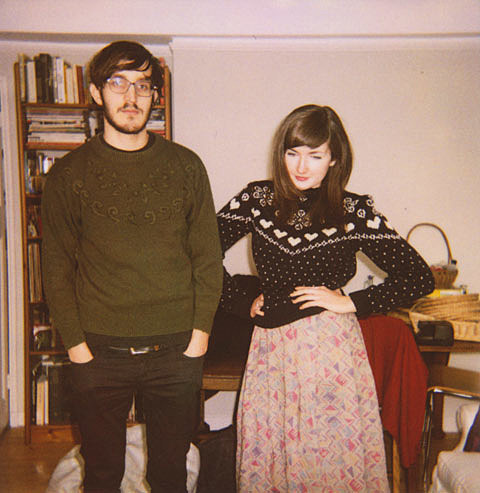 Tonight (3/2) marks the American debut of UK duo Summer Camp who play an early show at Mercury Lounge and are signed to Moshi Moshi and have been featured on this site, and favored by blogs like Gorilla Vs. Bear and Altered Zones. The washed out '80s polaroid artwork of their Young EP matches the hazy, murky, nostalgic sound, not to mention their choice in sweaters.

Despite the supposed anonymity surrounding these two, it's actually the latest project from UK singer-songwriter Jeremy Warmsley who until recently was pretty much known for being part of the London scene that spawned Mumford & Sons, Laura Marling, Noah & the Whale, Fanfarlo (who he's sometimes a member) and, tangentially, Mystery Jets. You may have seen him play solo at Pianos or with Fanfarlo at Bell House in September 2009.

His last record, 2008's How We Became, mixed folk and electronic elements, so the Summer Camp sound is not completely out of left field for him. He's a talented songwriter, producer and arranger which brings a level of craft to the proceedings you don't see with a lot of this sort of stuff. And promisingly, the group's debut album is being produced by Pulp keyboardist Steve Mackie, the first fruits of which can be heard at the top of this post -- "I Want You" which drops most of the glo-fi haze for pretty solid dancefloor pop.

Opening for Summer Camp at Mercury Lounge are locals High Highs who make lovely dreampop not too far off from The Radio Dept. or Wild Nothing. (They've opened for the former and covered the latter.) No full-length out yet from this duo, but you can download a few tracks from their Bandcamp page and I recommend you do. Both Summer Camp and High Highs will be at SXSW and all shows I know about for each are with some songs and videos below...