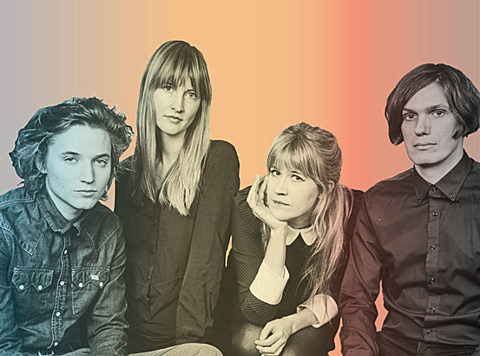 Tennessee Thomas of oughts-era LA band, The Like, has formed a new group called Summer Moon that features Nikolai Fraiture of The Strokes, Erika Forster of Au Revoir Simone, and Lewis Lazar. The band made their first live appearance with a short set at Baby's All Right in December as one of the surprise guests at the David Lynch Foundation benefit with Budos Band and Jonathan Toubin. That show, which was also Thomas' 30th birthday party, featured a short set from Suzanne Vega with Dev Hynes and Elvis Costello drummer Pete Thomas (who is also Tennessee's dad). Anybody catch that show? The Examiner was there, saying Summer Moon's "sound is harder than the melodic pop of both Strokes and Like, with Tennessee Thomas giving it jet propulsion."

Summer Moon have a website, plus all the relevant socials, but no music up to hear yet. You can see them live, though, this Saturday (2/28) at Baby's All Right when they open for Sean Lennon's Ghost of a Saber Tooth Tiger, a show that also features Invisible Familiars and Tall Tall Trees. That's sold out. Much further out, Summer Moon also open the Father John Misty and Angel Olsen show at Central Park Summerstage on August 5 and tickets are still available for that. They'll also be at SXSW.