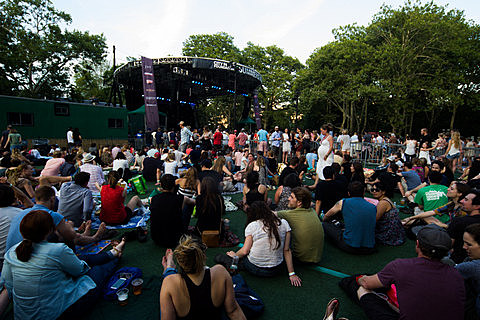 We already know about some ticketed SummerStage shows happening at Rumsey Playfield in NYC's Central Park this summer: Mastodon, Clutch and Graveyard play on 5/19 (tickets), The Kooks, Atlas Genius and Joywave play on 6/24 (tickets), Father John Misty, Angel Olsen and Summer Moon will play on August 5th (tickets) and Walk the Moon on September 24 (tickets on sale Friday [3/13] at noon).

The rest of the 2015 SummerStage lineup, most of it free shows in various parks around NYC, will be announced, one artist a day, over the next 30 days. Stay tuned to this post. We'll update it each day as names are announced.

SummerStage, originally just a series of mostly-free events in Central Park, expanded to parks in all 5 boroughs of NYC a few years ago (Central Park, Red Hook park, East River Park, etc). This year is their 30th anniversary.

More SummerStage 2015 artists include Dr John, Felice Brothers, Ibeyi, Bombino, Ingrid Michaelson, Giles Peterson, The Lox, an event based around NPR's "Ask Me Another," and more. All announced 2015 SummerStage artists are listed below...