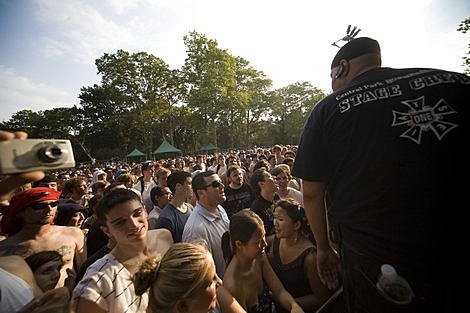 Tickets for this benefit will run you from $1000 to $25,000. Tickets to the other "benefits" (aka regular old ticketed shows) at the venue, are much cheaper. Those include John Butler Trio / State Radio, The Flaming Lips, The Black Keys, Hot Chip, Gov't Mule and Pavement.

The 2010 SummerStage series has also expanded its free shows outside of Central Park to include parks in all five boroughs. Look for free "Summerstage" music, theater and other events this summer in Brooklyn's Von King Park and Betsy Head Park, Bronx's St. Mary's Park and Crotona Park, Queens' Springfield Park, and Marcus Garvey Park East River Park in Manhattan, and others. Those parks have always had free shows, but for whatever reason, they are now "Summerstage".

The free-show lineup is 100% ANNOUNCED being slowly released (we're posting it all day today) (also check out the full free Celebrate Brooklyn lineup). Some of the Summerstage lineup, along with the list of theater productions (happening in all of the above-mentioned parks), is posted below...

Wed, June 9 at 7 pm
Betsy Head Park,Brooklyn - Nice and Smooth and The Awesome 2

-
American Schemes by Radah Blank, Directed by Charlotte L. Brathwaite
St. Mary's Park, Bronx
Friday, July 2 - Saturday, July 3
8:00 - 10:00 p.m.
Crotona Park, Bronx
Friday, July 9
8:00 - 10:00 p.m.
American Schemes is a special commission by City Parks Foundation that delves into and explores the enigma of The American Dream. Comprised of three acts that focus on people from various social hierarchies including immigrant vendors trying to make dollars, corporate yuppies trying to make a family and female emcees trying to make it big, everyone is trying to 'make it' in the land of golden opportunity. But at what cost?

Playwright Radah Blank's work has been described as 'Riveting...immediately alive' by The Voice in relation to her one-woman-Hip-Hop-dramedy, Kenya (Dixon Place, Hip-Hop Theater Festival, Public Theater's New Works Now, HERE; awards: New Professional Theatre's Annual Writers Award for Best Script, The NY Foundation for the Arts Artists Fellowship and Nickelodeon's Writers Fellowship). She wrote for the Nickelodeon shows - Little Bill and The Backyardigans, co-created the animated musical short Papa Moco Jumbie for the network and created a pilot based on her life as a comic in NYC called My Life Is aJoke for TeenNick. She was chosen to form The Public Theater's inaugural Emerging Writers Group (2008) where she created the satire nannyland. Her latest solo project, Happy. Flower. Nail explores gentrification through the women of a Bed-Stuy nail salon. HFN was chosen for development at Voice and Visions 2009 Envision Retreat at Bard. Her latest play, Casket Sharp!, is a dark comedy that explores the world of gang violence through the eyes of a man who inherits his family's funeral parlor. Seeing writing as a path to self-discovery and self-empowerment, Radha has instructed NYC youth in poetry and playwriting for over fifteen years.

--
Summer Shake Up!: A Special Event for Students with The Public Theater
Americqan Schemes by Radah Blank, Directed by Charlotte L. Brathwaite
Crotona Park, Bronx
Saturday, July 10
10:00 a.m. - Check in for Summer Shake Up!
10:30 a.m. - 1:00 p.m. Summer Shake Up!
8:00 p.m. - American Schemes
Join us for Summer Shake Up!; a fun and special theater event for students 6th grade and up! Experience the workings of a major American theater company and participate in an exciting dramatic encounter with Shakespeare led by professional artists from the renowned Public Theater. Geared for students entering 6th grade and up, but families and all ages are welcome! Participants will investigate Shakespeare's text through games and improvisations and even have the opportunity to perform on stage at the newly renovated Crotona Park Amphitheater.

Sharon Bridgforth, is a two time Alpert Award Nominee in the Arts in Theatre and is recipient of the 2008 Alpert/Hedgebrook Residency Prize. Her work has received support from the National Endowment For The Arts Commissioning Program; The National Endowment For The Arts/Theatre Communications Group Playwright in Residence Program; National Performance Network Commissioning Fund; the Paul Robeson Fund for Independent Media; and the Rockefeller Foundation Multi-Arts Production Fund Award. Bridgforth is the author of the Lambda Literary Award winning, the bull-jean stories and love conjure/blues, a performance/novel. Bridgforth (Summer, 2010 by University of Texas Press).

--
Goodbar by Waterwell
East River Park, Manhattan
Friday, August 20 - Sunday, August 22
8:00 - 10:00 p.m.
Reviving the lost art of the Live Concept Album, NYC rock band, Bambï, teams up with downtown theatre company, Waterwell, to tackle one of the most controversial pop culture artifacts from the '70s, Looking for Mr. Goodbar. Taking inspiration from both the film starring Diane Keaton and the novel by Judith Rossner, Bambï and Waterwell explore the timeless themes of sexuality, independence and persona as seen refracted through a disco ball. Join Bambï and Waterwell as they take on this dark classic, celebrating New York in all its grim glamour.

Waterwell strives to create new theatre that entertains and enlightens. The company seeks to prove itself a vital presence in the lives of its audience by remaining always responsive: responsive to the events affecting the world at large, responsive to changing modes of expression and responsive to the individuals attending the performance. Waterwell endeavors to cultivate the inherent danger in live performance to create an exciting and unpredictable event - an event pruned down to its irreducible elements: human being sharing a space and a story. Through that story...through the humor, sadness and hope it evokes...Waterwell hopes to empower its audience to change their lives and the world in which they live. SummerStage is proud to welcome back this celebrated theater company that performed to critical acclaim in 2008 with their play, The King Operetta.

--
Five Days in March by Toshiki Okada, Performed by Witness Relocation
East River Park, Manhattan
Monday, August 23 - Tuesday, August 24
8:00 - 10:00 p.m.
Five Days in March by Toshiki Okada is set in the days before the U.S. began its war against Iraq in March 2003. Minobe meets Yukki at a rock show. Their awkward conversation leads to five days of wild sex in a love hotel. Azuma sells Miffy a ticket to a bad movie. Miffy thinks Azuma doesn't return her feelings, so she decides to move to Mars. Yasui and Ishihara go on the anti-war protest. The police escort's uniforms elicit more comment than the war itself. Oblivious to the imminent invasion of Iraq, these hipsters obsess over the details of their lives, perfectly capturing the irony and impotency of Generation Y in Japan today. The story unfolds through actors who slip in and out of character while also narrating and playing out scenes. The play, a winner of the prestigious Kishida Kunio Drama Award, is at once funny, sad, anticlimactic and devastating.

Playwright Toshiki Okada practices a strange sort of methodology for creating plays. Even though he employs some, he nevertheless makes a point of "not getting too comfortable with any particular methodology or holding on to one style to the point where it holds him back." Unique choreography, which borders has been compared to dance choreography, endows the actors with "noisy" corporeality, is a hallmark of Okada's plays. In 2005, his work, Five Days in March won the 49th Kishida Drama Award.

Witness Relocation is led by director/choreographer Dan Safer. Described by Performing Arts Journal as a "dance theater anarchist's utopia", the company has over a dozen original productions, performed a two year residency in Bangkok, and have performed in theaters, nightclubs, rock videos, and on a Thai TV Soap Opera. Recent productions include The Panic Show (DNA, Bumbershoot Festival, in France at Le Quartz), Haggadah (La Mama), Mikuni Yanahaira's The Blue Bird (English language premiere), Vicious Dogs On Premises (which has toured across the US and Eastern Europe and will be presented at Theater de Chaillot in Paris next year), Dancing Vs. the Rat Experiment (three 2007 NY Innovative Theater Awards, Best Production, Sound, Choreography) and Thomas Lehmen's Schriebstuck. Coming up: Heaven On Earth, an all new show written by the incredible Chuck Mee and performed in collaboration with French company Ildi! Eldi (developed at Les Subsistances in Lyon, France). SummerStage is proud to bring back this cutting Edge Theater company that enthralled audiences in 2009 with their play, Dancing Vs. the Rat Experiment.

--
Beowulf - A Thousand Years of Baggage performed by Banana Bag & Bodice
East River Park, Manhattan
Wednesday, August 25 - Friday, August 27
8:00 - 10:00 p.m.
Digging into the roots of the original epic poem, this re-imagined version of Beowulf - A Thousand Years of Baggage hearkens back to the raw and rowdy style of storytelling in the old Scandinavian mead halls - with a passion for fierce poetry and a pint of thick beer. Monsters and professors collide in blood-soaked Scandinavia as this hefty poem is rescued from 1,000 years of analysis and transformed into a defiantly raucous dissertation on art and violence. With an 8-piece band including dueling trombones, bass clarinet, accordion and saw, Beowulf combines Weillian cabaret, 40's jazz harmony, indie rock, punk, electronica and Romantic lieder into a cacophonous swirl.