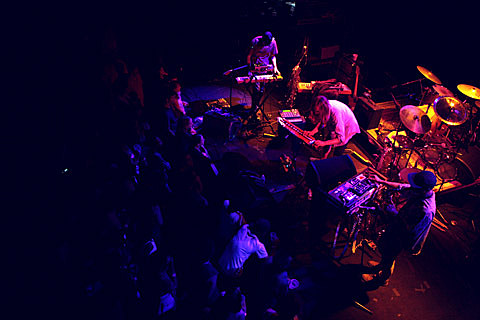 You have two chances to check out Sun Araw Band before the clock strikes 2012. The first is in Rio de Janeiro at the Novas Frequências Fest on December 7th. The next is two days later in Brooklyn at 285 Kent on 12/9 with Regal Degal, Heatwave, CSC Funk Band, and a Prince Rama DJ set.

Prince Rama just finished a batch of dates with Indian Jewelry including one at the Mohawk in Austin with Melt Banana (which we posted pics from HERE). They're now down in Miami for Art Basel and touring their way home. As previously mentioned, Prince Rama play Glasslands on 2/23 with Gary War (tickets), BUT they've also not surprisingly scheduled another show much sooner. One day after they DJ at 285 Kent they'll open for Hooray for Earth, along with Woodsman, at Public Assembly. Tickets are on sale for that too.

More tour dates and videos for "Impluvium" and "At Delphi" from Sun Araw's recent Ancient Romans LP are below.