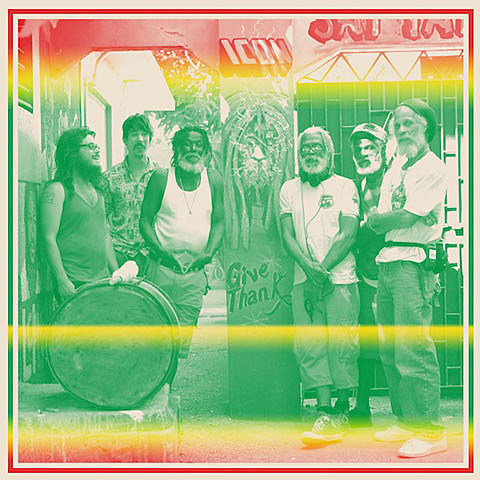 Speaking of Sun Araw (aka Cameron Stallone), he's part of the recently released ninth installment of Brooklyn label RVNG Intl's FRKWYS series, which brings together modern experimental artists and their influential forerunners to collaborate on an album. In the past, we've seen collaborative releases from Julianna Barwick and DNA's Ikue Mori; Daniel Lopatin, James Ferarro, Samuel Godin, and composer David Borden; and Blues Control and Laraaji, among others. The newest release, FRKWYS Vol. 9: ICON GIVE THANK, sees Sun Araw and M. Geddes Gengras, who were both members of the now-defunct Pocahaunted (whose lineup also included Amanda Brown aka LA Vampires and Bethany Cosentino of Best Coast), teaming up with The Congos, who released the dub/reggae classic Heart of the Congos in 1977, produced by Lee "Scratch" Perry. That's the artwork above.

The track, "Happy Song," which you can stream below, sounds too modern for a '70s reggae band but too genuinely nostalgic for modern psych experimentalists, and doesn't really fit anywhere in between.

ICON GIVE THANK was released in conjunction with the film, ICON EYE, a film documenting the album's making. That film will be screened as part of the Unsound LABS on Saturday (4/21) at Anthology Film Archives at 1 PM. The screening will be followed by a discussion with Sun Araw's Cameron Stallones, director Tony Lowe, and project producer Matt Werth.

The movie screening is one of at least three Sun Araw events in NYC this weekend, with the first being a full band show at Le Poisson Rouge Friday night (with Pole & Marc McGuire of Emeralds), and the last being the recently-mentioned DJ set with Heat Wave at Glasslands.

Film trailer, streams, album tracklist, and all dates, below...