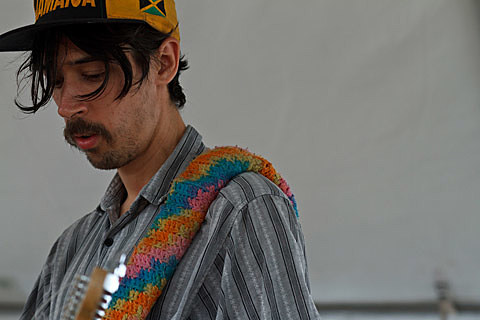 As mentioned, psychedelic dub wizard Sun Araw will be in NYC to open for Gang Gang Dance at Public Assembly on September 21, at what is one of three shows for GGD. Tickets for that one are still available. He'll return to NYC soon after to play Death by Audio on September 27 with Sinkane, Weyes Blood (who we wrote about HERE) and Deep Magic. All Sun Araw dates are listed below.

Back in July, we mentioned that Sun Araw had a new album on the way called The Inner Treaty. Soon after that he revealed more details on the release. It will be out on September 18 via Drag City and you can check out the cover art and tracklist below. The album was produced by Sun Araw's Cameron Stallones and mastered by Sonic Boom. You can download the first single, "Like Wine," at the top of this post.

A list of all dates, cover art and tracklist are below.