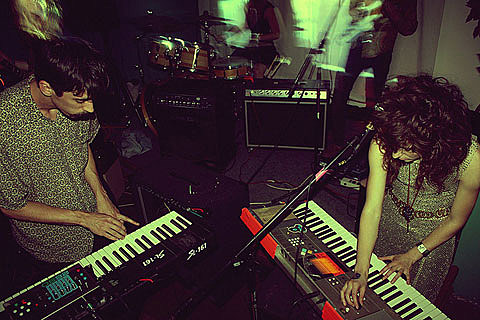 The bill is looking pretty stacked on August 26 at Music Hall of Williamsburg with Sun Araw, Prince Rama, Julianna Barwick, Pterodactyl, and Teengirl Fantasy (DJ set). Check ticketmaster for tickets, probably next week when the show gets officially announced.

The Brooklyn show will be the first NYC performance of Sun Araw and Prince Rama's aptly titled joint project Prince Sunarawma. They debuted the project during SXSW at Brave New Books on March 19 (pictured above). The show will also be the album release show for Sun Araw's upcoming LP Ancient Romans, due out three days earlier on August 23 via Sun Ark / Drag City. Catch Sun Araw and Tanlines again the next night (8/27) at PS1's Warm Up.

Prince Rama has other upcoming shows happening sooner too, like... this Saturday (7/9) on the Market Hotel Roof in Brooklyn where Prince Rama will celebrate the release of the first single off their new LP Trust Now, which will be released on October 4 via Paw Tracks. According to the facebook event, "At sunset, 30 mini-cds containing the new single will be tied to balloons and released off the roof into the great beyond." And by "into the great beyond" they of course mean into someone's backyard or stuck on an electrical pole or in a tree or in a bird's nest or down a dolphin's throat, or stuff like that. Prince Rama and special guests will also DJ and Total Slacker will VJ. No word on who will BJ, or whether there will be JJ. "Cosmic Yoga led by Austin Samsel at 7:00PM, get in the zone." FREE.

Prince Rama also DJs on July 21 at Glasslands with Julian Lynch and Dent May. Tickets are on sale now.

You have a few opportunities to catch Teengirl Fantasy before the show as well. They open the sold out James Blake show at Webster Hall on July 13. They'll also head out on tour with PIctureplane later this month, which hits NYC on July 22 at a TBD location and July 23 at Coco 66 with Gatekeeper. Tickets for the Coco66 show are still available.

As mentioned in This Week in Indie, Pterodactyl also plays Saturday (7/9) at Death By Audio. The show is Grooms' record release party for their new LP Prom which drops next week via Kanine. The Immaculates are also on the bill. Pterodactyl will release the LP Spills Out this November on Brah/Jagjaguwar.