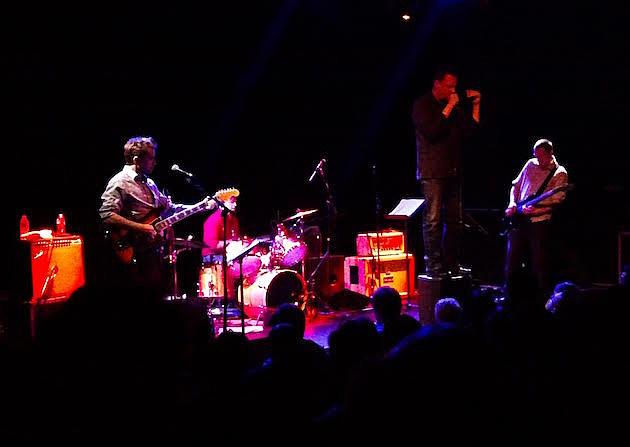 Justin Broadrick and Mark Kozelek brought their Jesu/Sun Kil Moon collaboration to a sold out Music Hall of Williamsburg on Friday, February 26 for what was their only US date on a very short and massively geographically spread out winter tour (tour dates include(d) Oslo, Stockholm, Malmo, Paris, Brooklyn, and Tokyo).

This show turned out to be, for me, one of the most surprising and fulfilling show-going experiences I've had in years. A lot of that had to do with the venue's atmosphere. For a sold out Music Hall of Williamsburg show, the place felt surprisingly undersold and roomy. I've been to sold out shows there where people are packed against each other from the front of the stage all the way back to the doors leading out to the merch/bar veranda. But in this particular instance, there was tons of room in the balconies, tons of room on the elevated areas to the left and right of the main floor, and tons of room around the soundboard area. I wonder if it was an intentional under-sell. And while the room was pitch black, there was also very minimal lighting on the stage, with only a wash of purple and orange light; just enough to spotlight the musicians and to make Kozelek's lyrics notebook legible for him. As a matter of fact, at one point, the lighting person inexplicably dimmed the lights, a move which was met with Kozelek asking to have the lights back up a bit so he can at least read his notes. Another contributing factor to the subdued atmosphere were the several dozen "No Photography" signs plastered throughout the venue, much to the chagrin of our intrepid photographer who got to the show only to be told "no photos." Miraculously, people adhered to this rule. Every now and then I'd see one or two cell phone screens pop up in the crowd but that happened very infrequently. I couldn't believe my eyes. I haven't see a crowd this un-illuminated by cell phones since, I don't know, the 90s?

The performance itself was absolutely staggering. The set clocked in a just a hair under a whopping three hours, with an eleven song set and a three song encore. The show kicked off with a prerecorded version of Kozelek singing "Somewhere Over The Rainbow" playing over the house system. After that, Justin Broadrick, Steve Shelley, Nick Zubeck, and Mark Kozelek took to the stage. It might be worth mentioning here that the show was also much quieter than I had expected; especially with someone like Justin Broadrick on guitar. But overall, the volume level was quite low, to the point that if you were wearing earplugs you wouldn't really hear much. Anyhoozle, they started off their night with a stunning rendition of Sun Kil Moon's "Cry Me A River Williamsburg Sleeve Tattoo Blues". After that they played their album "Jesu/Sun Kil Moon" in order, in its entirety.

For the uninitiated, Jesu / Sun Kil Moon is one of the saddest and most melancholy albums I have ever heard. But as a record, I've always been on the fence about it. The lyrical content is unbelievable, but something about the production, mix, and other choices were hit or miss with me. It's hard to pinpoint, but the record never sat correctly in my earholes and pea brain. However, the live version was a game changer. A tour de force. Broadrick, Zubeck (who has a record coming out on Caldo Verde on March 11) and Shelley were a cohesive backbone providing an immaculate and pitch perfect sonic web where Kozelek's voluminous lyrics perfectly and comfortably rested. One of the most beautiful and harrowing songs from the album, "Exodus," was a particular stunner that created quite a lump in your man Klaus' throat. Named after Mike Tyson's deceased daughter, "Exodus" is about parents grieving the loss of a child. The scope of the song is huge, but in particular he mentions Nick Cave's son ("The news hit me like a bus into a hill"), Danielle Steele's son who died of a heroin overdose ("On his bedroom window still remains the sticker he put there/ The Misfits/ Every time I walk past her home on Washington Street/ I look up and I glance at it"), and Mike Tyson's daughter ("He spoke about the passing of his daughter Exodus and how he joined the bereaved parents group/ He knew when he arrived at her bed that he was not alone/ Because the parents of the other children embraced him and they cried together in the hospital room"). He also discusses his cousin Carissa and his father's older brother Lenny who died young. The song concludes with a repeated chorus of "For all bereaved parents, I send you my love" which Kozelek insisted the attendees at MHOW sing for him, and which I'd say about 95% of them complied. As a person who has lost a parent and a few childhood friends, this song had a particularly profound effect on me.

Other powerful moments included their rendition of "Fragile" which is about Yes bass player Chris Squire, who passed away in June of 2015 after battling a rare form of Leukemia. This passing reminds Kozelek of a friend of his from his younger years who also passed away from Leukemia and who is buried in the same cemetery he and Kozelek used to drink beers as youngsters. "Song of Shadows," which was performed with a hilarious (to me) "War Pigs" intro, is basically a love letter to longtime girlfriend Caroline where he imagines his life without her and just how (more) wretched he'd be. And then there was "Father's Day" where Kozelek sort of sheds his curmudgeonly skin and discusses his fondness to his parents through thick and thin and the joy he gets from hearing the kids having fun in the playground near his house. After an unbelievable presentation of their entire record, the crew came back out for a three song encore featuring Sun Kil Moon classic "Richard Ramirez Died Today of Natural Causes" and two covers; Elliott Smith's "Condor Ave" and David Bowie's "Win."

Kozelek may have surpassed Robert Pollard for the title of best stage banterer. For some reason he spent considerable time talking about the Black Sabbath farewell tour. At the beginning of "Father's Day" he mentioned that "I feel like I should start singing like Peter Murphy or Glenn Danzig or something." At one point someone in the crowd shouted "We wanna hear Jesu!" to which Kozelek replied "You ARE hearing Jesu, you fucking idiot! This is a col-lab-or-ATION!" Very late into the set, there was a fist fight in the crowd. I have no idea what started it, but it led to yet another pretty funny diversion. Kozelek was just on FIRE with stage banter and bullshitting with the crowd.

It is a shame that this show wasn't part of a larger US tour because it truly was one of the best shows I have ever seen and I think a lot of my fellow country(wo)men deserve to experience a show this epic.