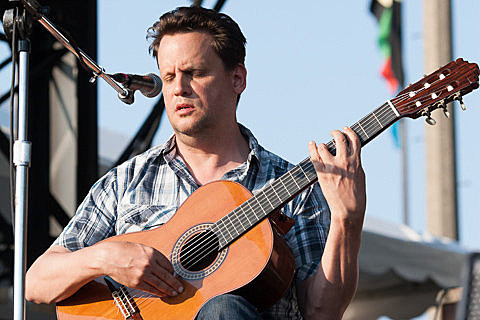 Mark Kozelek brought his Sun Kil Moon tour to NYC last night (7/24) for a show at Town Hall. Mark's been playing solo shows in NYC fairly consistently for a while now, but this was the first full-band Sun Kil Moon show here in recent memory (or ever?), and in a larger venue than the ones he'd been playing. Mark was joined by a drummer, an electric guitarist, and a keyboardist for the entire set, plus a cellist for part of it. Why the sudden change? Mark said on stage last night, "I don't really know why but my new record, Benji, is doing pretty well. Kids are coming to my shows again. It used to be all old people but now I see 24 year old girls in the audience... because Pitchfork. I used to fucking hate Pitchfork. Now I'm grateful to them."

That wasn't the only time Mark took an extended break to talk to the audience, mostly delivered in his deadpan tone, which was as entertaining as the songs themselves -- though in a much different way of course. While his banter had the crowd laughing, the songs kept the relatively large theater silent and attentive. And for good reason. Mark's a funny guy, but the lyrics on Benji are about some depressing shit. He sang the one about his second cousin Carissa dying when an aerosol can blew up in the trash, the one about his uncle dying the same way, the one about serial killer Richard Ramirez dying, the one about being sad for the day his mother dies, etc. All of this while sitting on his chair, hunched over his nylon-string guitar, and not singing too close to the mic but still projecting through the whole room. His band mostly stayed calm backing him, but a few moments -- like "Richard Ramirez" and "Dogs" -- saw them rising to some unexpected and showstopping crescendos.

A moment both musically satisfying and kind of hilarious came during "Livingstone Bramble" from Mark's album with Desertshore, where he dropped the "I hate Nels Cline" line and, in place of his Nels Cline-mocking solo, the cellist Isabel did her own scratchy, freakout version as the band quieted down to give her the spotlight. Another happened when in between songs, his backing band broke out into a space interlude, which caused Mark to look up from tuning his guitar and say, "Don't do that, it makes me think of 'The End' by The Doors. It makes me chuckle." Then after pausing to think about it, said, "I guess that's not a bad thing... alright go ahead and do it." To end the pre-encore set, Mark changed up the vibe in the room once before by leaving his chair and guitar for the first time during the set, and performing the two final songs standing front and center with just his mic. "Not too fast," he warned the band, inspiring more laughter from the crowd, before showing off that sitting down, hunched over his guitar isn't the only way he's still an excellent performer.

We don't have pictures from the NYC show but check out our photos from their set a week earlier at Pitchfork Festival in Chicago.