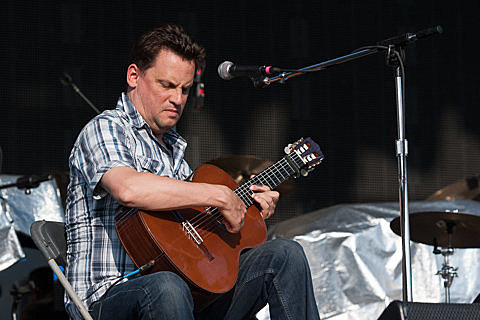 In case you're not caught up, Sun Kil Moon's Mark Kozelek, not long after he controversially called a loud North Carolina crowd "fucking hillbillies", was playing a set at Ottawa Folk Festival in September at the same time The War On Drugs were playing their set, and he called out their sound bleeding over to his stage saying, "Who the fuck is that? I hate that beer commercial lead-guitar shit." He later wrote a letter (which you can read in full below) where he challenged The War On Drugs to collaborate on a song he wrote called "War On Drugs: Suck My Cock/Sun Kil Moon: Go Fuck Yourself." We guess TWOD didn't take him up on it, but Mark's still decided to release "War On Drugs: Suck My Cock," which he just posted to his website. Listen HERE or download it above via Pitchfork.

Mark's letter to The War On Drugs
To Pitchfork, Stereogum, and anyone reading this: I did not apologize to "War On Drugs." I gave them an explanation of the events that lead to my comments. I do not, and will not, apologize for stage banter. I was just letting WOD know that it wasn't personal.

There is an epidemic of people being 'offended' by things as some kind of hobby. Anyone offended by the "H" word needs to be glad their country isn't being invaded by missiles. Rock-A-Billy is still a genre of music so spare me your whining about "Hillbilly" being offensive.

War On Drugs. Due to all of the fuss, I checked out your live track on Pitchfork, and I called it right. You sound like Don Henley meets John Cougar meets Dire Straits meets "Born In The USA" era Bruce Springsteen. It's not a criticism, it's an observation.

I challenge War On Drugs to let me join them onstage and play a hilarious song I've written called: "War On Drugs: Suck My Cock/Sun Kil Moon: Go Fuck Yourself" at the Fillmore, October 6th, provided they let me handle the beer commercial lead guitar.