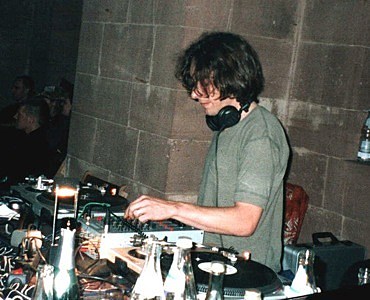 Hope you were able to do some dancing this week. If not, Sunday is made for it - but first, Thursday's review:

I decided to hit up Hiro to see KIM. Someone (by process of elimination I want to say Kid Indie, but I'm not 100% sure) was deejaying when I arrived. He was playing good tracks, but many of them were ones that were really popular last summer. Is anyone else finding that there doesn't seem to be a group of electronic songs that define the summer of '08? I'm listening to a lot of things, but nothing is really sticking like a lot of songs from last summer did...

KIM went on around 1. His set was good . Much of it consisted of tracks I hadn't heard before - very, very fresh and great transitions, but maybe a little too smooth. It was like listening to a podcast playing in the background - none of the tracks really made me want to get up and dance. Also, Hiro was pretty empty - not sure of the cause, possibly Santos' line-up, or just Santos in general? Who knows...

Keep it at the Yard, this time for Sunday Best where they're changing up both the food and the deejays:

The food's fresh and authentic, with quesadillas and tacos made on homemade tortillas. And, to boot, resident DJs Justin Carter, Eamon Harkin and Doug Singer are playing alongside Move D. Move D is a long-time music producer, who's recorded for labels ranging from Warp and Philpot to his own Source Recordings label. His music is an excellent blend of crafted ambient sound and popping dance music. He'll be perfect in the outdoor space.

You can download quite a few of Move D's mixes and live sets here.

If you want some Manhattan-based outdoor dancing Meanred is taking over Summerstage. Not a fan of much of the line-up, but A-trak's (who already was at Summerstage a few weeks ago) deejay sets are usually very good mixes of very new electro, usually things that are underplayed, and some hip-hop-ish stuff to keep things interesting. Also, Meanred throws a great party and it's free!

MeanRed Productions takes over Summerstage! We were asked by the folks over there to put together a banger of a day, and voila! A banger it shall be.

On July 20th, our MadFools party will descend upon Rumsey Playfield - A spectacular display of confetti cannons, beach balls, dancing monsters, and performances by the reigning stars of international dance floors.

We've got Santogold, Diplo, A-trak, KiD CuDi, Blaqstarr and Mz Streamz on board, bringing with them their various interpretations of electro-pop, glitch-hip hop, ghettotech, miami bass, baile funk, and grime. Want to know where music is headed? Look no further.

EVENT DETAILS
Doors 3pm, *free*
Central Park Summerstage, Rumsey Playfield. Enter the park at 69th Street & 5th Avenue on the east side or at 72nd Street & Central Park West on the west side.

After you're done there (the party ends at 7) go home, take a disco nap and hit it hard at Santos for the after-party. The line-up is sick. Jokers of the Scene (who recently collaborated with New York based clothing company Mishka) are great live and I've been hearing a lot of good things about Congo Rock lately.

Free w/ RSVP to madfoolsatsantos@gmail.com. $5 without.