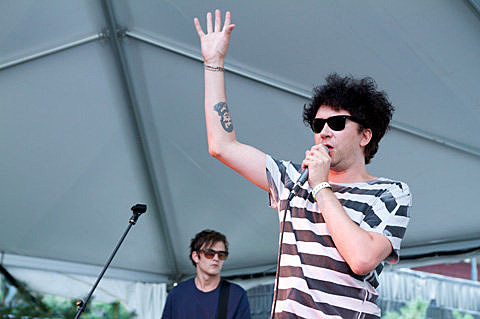 This past week has been a rather dramatic and tumultuous week with Sune ending up in the hospital. First off waiting for the diagnosis which is where you drive yourself crazy with all the fear, anxiety and various obsessive thoughts of terminal diseases. Then there's the aftermath of dealing with the reality of things.

Albeit, we have decided that the shows must go on and that there is always a solution. We have been here before back in 2008 when I was ordered to stay horizontal for 5 months. And this time it's Sune who has to rest and heal. I will go to Europe and spread our Rave gospel. I'm terrified and overwhelmed by the task of playing without Sune, but also encouraged and motivated by the challenge. Needless to say it will be a deconstructed Raveonettes. I will have my two danish knights by my side and we will give you all we've got.

See you out there.
Sharin

The above message was posted by Sharin Foo of The Raveonettes to their blog on Tuesday (8/9). The post is a follow-up to one posted a day earlier (8/8) stating that Sune Rose Wagner was admitted to the Beth Israel Medical Center in Manhattan for a herniated disc. Sune was released from the hospital but has six weeks of intense physical therapy ahead of him, which is causing him to miss The Raveonettes' European tour. Some pictures and more info about the hospital can be found on The Raveonettes blog.

The Raveonettes were in NYC to play Beekman Beer Garden on July 31 with Eternal Summers the day before both bands played Maxwell's in NJ.

Best of luck to Sune, Sharin and the rest of the Raveonettes team. European tour dates below...