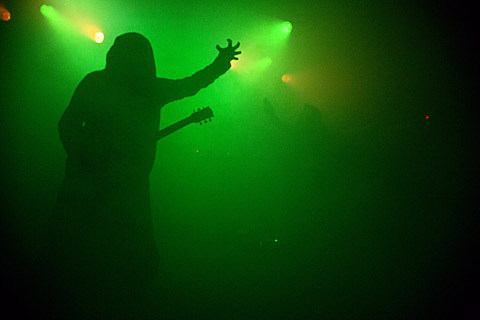 Drone-metal titans Sunn O))) have just announced a new album. It's called Kannon, and it will be out on their usual label Southern Lord on December 4. The album will be their first non-collaborative full-length since 2009's Monoliths and Dimensions, although it comes rather quickly on the heels of last year's album with Scott Walker (no not that Scott Walker). In a press release, the band called Kannon their most "figurative" and "metal" album, and they also managed to drop a Darkthrone reference, so that all bodes rather well.

Sunn O))) have a few European dates coming up, and band member Stephen O'Malley also has some of his own shows, including solo gigs and other various collaborations. One of those solo gigs is in NYC at the newly opened Williamsburg venue National Sawdust on October 25. It's part of Pitchfork/Blackened Music's 'Tinnitus' series. He'll be joined by Glenn Branca Ensemble guitarist Reg Bloor and Andrew Hock, who used to play in Castevet and now plays in Psalm Zero. Tickets for that show are on sale now.

Check out a video of Sunn O))) playing at Primavera Sound earlier this year, as well as a lecture that Stephen O'Malley gave to the Red Bull Music Academy in 2013, and the list of tour dates, below...