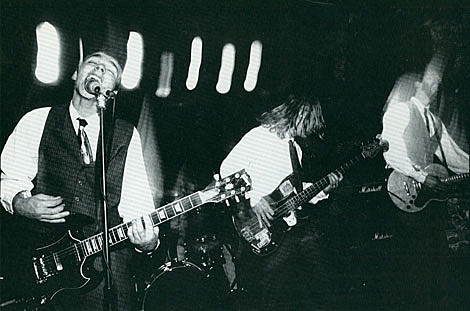 Following a more than 10 year hiatus, all four original members of pioneering Seattle rock band Sunny Day Real Estate will regroup for a 20-date US tour starting Sept. 17th, 2009. In addition, Sub Pop Records will re-issue both Diary and the band's second full-length album, commonly known as LP2 (or "The Pink Album" for its entirely pink cover). Both re-mastered albums will include rare bonus tracks as well as newly written liner notes and will be released on both CD and LP Sept. 15, 2009, just prior to the start of the tour. [Sub Pop]

These rumors have been floating around for months, and I'm really glad they came true. Thanks to everyone who has emailed in about this as well.

Originally formed in Seattle in 1992, Sunny Day Real Estate featured Nate Mendel (bass), William Goldsmith (drums), Dan Hoerner (guitar,vocals) and Jeremy Enigk (vocals, guitar). Diary, the band's first full-length album, was released in 1994 on Sub Pop, going on to become the seventh-best selling record in the label's history with more than 231,000 copies scanned in the US alone. Diary was recorded at Chicago's Idful Studios with producer Brad Wood and released to critical acclaim. Following the completion of a US Tour to support the debut release, the group headed back into the studio with Wood to record the follow-up.

But during the recording sessions, internal tensions splintered Sunny Day Real Estate, resulting in a sudden break-up and the finished album being turned in to Sub Pop without a title or artwork. LP2 was released in November 1995, by which time both Goldsmith and Mendel had joined Foo Fighters and Enigk had begun a solo career. Without Mendel, Sunny Day Real Estate reunited in 1997 and released two more studio albums (the 1998 Sub Pop release How It Feels to Be Something On and in 2000 The Rising Tide on Time Bomb) before disbanding again in 2001. Sunny Day Real Estate's influence has grown exponentially since the band's initial split.

"I wasn't around for the second version of the band that recorded the 3rd and 4th albums, so I've always had a feeling of unfinished business there," Mendel explains. "We had all these outsized ideas back then, 'Everyone's going to learn a new instrument,' and 'Let's do a rock opera,' but before we could get anywhere with them, the band broke up. We left behind all these weird and beautiful songs, though, and they've stuck with me all this time. I'm really happy that we get a chance to play them together again."

Both Diary and LP2 will be available everywhere including SubPop.com & Sunnydayrealestate.fm.