"Frog Eyes and Sunset Rubdown are off the bill for the show tonight (May 19) at the Opera House. Islands, Cadence Weapon and Busdriver are still playing, but this makes much less of a megashow. The reason is bizarrely fucked: These two Canadian bands are somehow not being readmitted to Canada after their dates south of the border. They are being detained by the U.S. government for causes yet unknown. Is that actually legal?" [Zoilus] 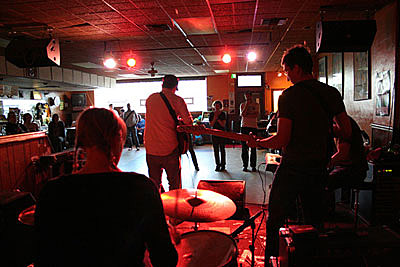 "Ordinarily, fifteen people showing up for this show would be inexcusable. But given that it was just announced yesterday evening, fifteen was more than adequate. Basically what happened was this: the two bands were going to enter and leave the US several times over the next few weeks (Montreal and Toronto dates were also scheduled), but the United States government had a problem with that so they had the choice of either staying in the US or staying in Canada. Given that a sold-out show in New York City was coming up that would be very hard to reschedule, the choice was a no-brainer." [Good Hodgkins]