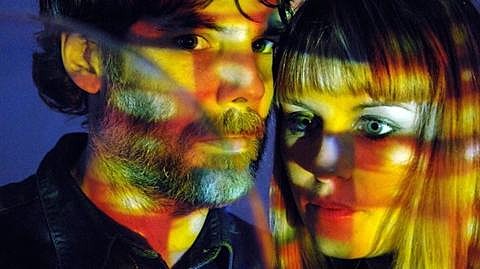 Super Furry Animals have been on hiatus since 2010 or so following the previous year's Dark Days/Light Years. The band are still together just working on individual projects at the moment. Frontman Gruff Rhys is probably the most prolific, having released solo LP Hotel Shampoo in 2011 and last year put out a second Neon Neon album with collaborator Boom Bip. You can check out the video for "Hammer & Sickle" from Neon Neon below.

Bassist Guto Pryce, meanwhile, formed Gulp with singer Lindsey Leven who have put out two singles to date. Both blend elements of late '60s British folk, groovy bachelor pad rhythm sections and glitchy electronics. SFA keyboardist Cian Ciaran mixed the records. Classy and cool, you can stream them below. Gulp, which live also includes Gwion Llewelyn of fellow Welsh band Race Horses, will be coming over for SXSW and while there have been no dates announced outside Austin, let's hope that changes.

Speaking of Ciaran, he put out his second solo album, They Are Nothing Without Us, in September 2013, loaded with anthemic, melodic rock (and angry protest lyrics) and is not that far off from songs he contributed to SFA's late '00s albums. You can stream his album via Rdio.

SFA drummer Dafydd Ieuan has been spending his time apart from the band with The Earth a group started by Mark Roberts of Catatonia (if you remember them) and is fronted by Dionne Bennett who used to sing with Rhys Ifans' band The Peth (Ieuan was in that band too). The band's debut album, Off On One, came out back in October 2012 and might be described as "widescreen soul." You can stream the album below too.