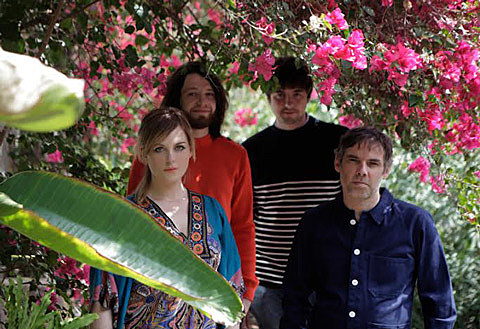 Gulp, the Welsh band featuring Super Furry Animals bassist Guto Pryce and Lindsey Leven (drums/vocals), have been working on their debut LP. That record, Season Sun, will be out next week (7/8) via Everloving. If you enjoy your krauty psychedelia with baroque and Brazilian touches (perhaps the most delicious variety), it's time to sit up straight and dig into this LP. We're premiering the album stream in this post. Have a listen, and check out the video for single "Vast Space" below.

Gulp, who are now a quartet, were over for SXSW but didn't play outside of Texas. Still no word on North American dates but we can hope. They do have a couple Welsh dates this month and those are listed below. SFA main man Gruff Rhys, meanwhile, will be over this fall for sure. In the meantiime, stream the Gulp album and video below...