The-Drum in Chicago in April (more by Tyler Trykowski) 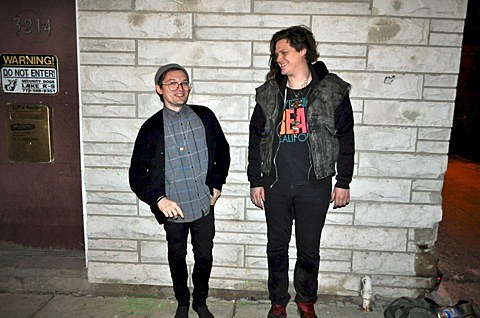 Three duos from the burgeoning Chicago beat scene, Supreme Cuts, The-Drum, and Sich Mang, will make their way to NYC for a show at Glasslands on July 20. The show is also with Brooklyn-born rapper Haleek Maul (who now lives in Barbados), whose Oxyconteen EP (which you can stream below or download above) features production from The-Drum and Supreme Cuts. Tickets for the Glasslands show are on sale now.

Supreme Cuts will release their new album, Whispers in the Dark, on July 10 via Dovecote Records, and you can download a track from that release above or stream it below. The Glasslands show is also acting as a release show for that album. In August, they head out on tour with Polica. All of their dates are listed below.

The-Drum and Sich Mang put out a split release earlier this year, which features two original tracks by each duo and remixes of each other's work. You can stream the whole thing or download it for $5 at bandcamp.

The-Drum, who played our BV Chicago stage at SXSW this year and another BV Chicago event before that, is also set to release a new EP, Sense Net, on July 17 via Mishka. You can stream the single from that, "/SYS," below.