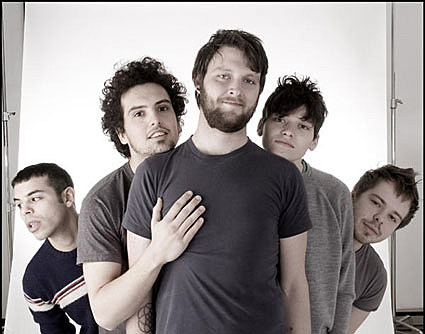 One of my favorite albums of the year so far is one that I don't even think came out this year - actually I don't know if it technically ever "came out" at all. It's an album I just first listened to a few days ago on J Heartonastick's insistence. It's one I've barely stopped listening to since, and it's one that You Ain't No Picasso, Exit Fare, and The Underrated Blog have been raving about for months. It's a self-titled album by an unsigned NJ band called Sure Juror, and it's available (as MP3s) for 100%-FREE on their blog (you'll also find it on an indie-friendly torrent site near you). The track above comes from it, and so does the one below:

More MP3s at Heartonastick. Their second album called Smut comes out soon too, and they have four demos from that one streaming on their MySpace (but listen to the first one first).

No scheduled shows at the moment. stay tuned.