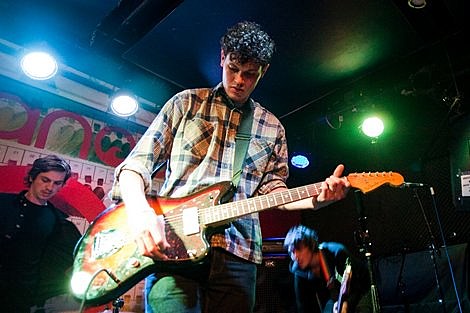 Surf City was just one of the 'surf' bands that made a splash at this year's CMJ. Both groups (the other being Surfer Blood) are set to repeat the feat at SXSW.

Before both of those, Surf City will be on a bill with fellow New Zealander Bachelorette at Union Hall on March 22nd (ticket info TBA).

While in NYC, Bachelorette will also be playing at Cake Shop on March 20th before heading out on tour with Beach House from March 26th to April 19th (Beach House continue with Washed Out after that). Beach House celebrate their new record (and their 9.0 Best New Music) at Bell House tonight (1/26).

Surf City do make some pre-SXSW stops on their way to Austin too. One is in L.A. on March 13th with The Fresh & Onlys, who will also be in Austin March 17th-20th. In addition, Fresh & Onlys play Noise Pop 2010 in their hometown of San Fran, and tour with King Khan & The Shrines (with no NYC date unfortunately) in April. The track above is off The Fresh & Onlys' 2009 Woodsist album Grey-Eyed Girls - they have a new just-completed third record due this spring on In The Red.

All tour dates and a video are below...