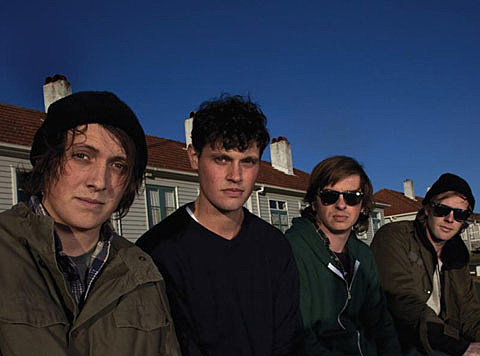 If you missed them in April:

NZ shoehazers, Surf City will hunker down in New York City to begin recording their follow up to the acclaimed Kudos (to be released by Fire Records in 2012). They will be stepping out for a few shows in the NYC area to rip through new material and a barrage of Surf City favorites.

Tonight's Brooklyn Bowl show is only $5.00 and with Xray Eyeballs and Darlings.

The Cake Shop show is the "CAKESHOP 6th ANNIVERSARY MELTDOWN! - balloons, festivalities, drink specials and all the usual awesome shy!!" Surf City play that Saturday night show before The Beets, and after Conversion Party, Holy Shit (not to be confused with Holy Fuck), Fanuelle, and Arianna Reines.

For 5-piece Brooklyn (via CT) band Conversion Party, the Cake Shop show is also the 2nd of two EP release parties. The first is one day earlier at Bruar Falls. Their new Sean Greenhalgh (drummer of CYHSY)-produced four-song EP was recently released on Kimono, and it's streaming in full at their Bandcamp page.