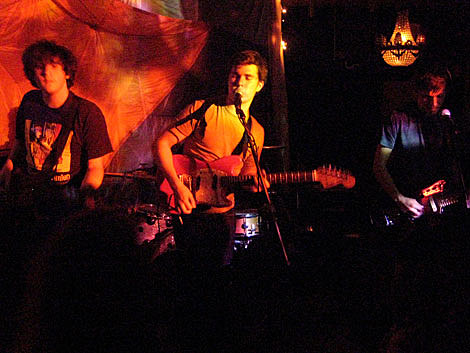 Florida's Surfer Blood went from being ignored to super-hyped overnight. One night in particular, actually: August 27, 2009. The band had been in town playing a string of woefully attended gigs. The last was to be at the Surf Bar, only to get a venue change to Bruar Falls that night. Thanks to the Internet, they manage to play to 30-40 people at Bruar that night and I think just about everyone who was at that show felt at least a little like I did:

It's not very often you go into a show blind and leave wowed but that what my reaction to seeing West Palm Beach, Florida's Surfer Blood last night at Bruar Falls. I think I was expecting a slightly poppier take on the shambolic noise skuzz that blows through smaller Williamsburg venues these days. But, despite reverbed vocals and echo guitars effects that would sometimes seize and glitch like an episode of Tim & Eric, Surfer Blood make accomplished, hook-filled indie rock with clever arrangements and great harmonies, as performed by four guys who can actually, you know, play. You hear so little music like this anymore from new bands -- Seattle's BOAT come to mind -- that is this catchy, skilled but not polished. It's not going to change your life or anything (yes, they do sound a little like the Shins), but it'll have you humming and awaiting the next time they come through town.

If you were following Twitter that night, you could actually watch the buzz from the Bruar Falls show to the Pitchfork 'Forkcast' the next day. If they'd had one more night in NYC after that, who knows what would've happened.

Their upcoming debut LP, Astro Coast, is choc-full of super catchy indie rock. And soon back for CMJ, if you miss Surfer Blood this time, it's because you're actively trying to avoid them -- according to their MySpace, they're playing 10 shows (announced so far) here next week. If there's a band playing more shows, I haven't heard about it. All dates below including the free BrooklynVegan day party at Pianos on Thursday, October 22nd (noon-6pm) (full details TBA). 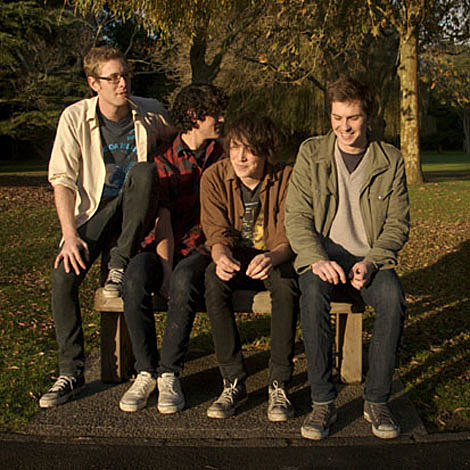 Giving them a run for the money is New Zealand's Surf City, easily one of my most-anticipated bands of CMJ 2009, who are playing three official CMJ events and a bunch of day parties. They had a full schedule posted on their MySpace last night including eight area shows...which has since been taken down. Guess things are in flux. It's been a long time since a new Kiwi band so evoked the classic Flying Nun sound, and had such good songs to boot. Not that they've released much to date -- an EP and a song for MORR Music's tribute to Flying Nun is about it -- but everything so far is pretty great, especially if you're a fan of The Clean, Tall Dwarfs, and The Bats. Check out "Records of a Flagpole Skater" and the especially good "Kudos" at the top of this post.

Official CMJ shows: There's an opening night Giant Step party on Tuesday at the Red Bull Space (40 Thompson) where Surf City are part of an all-Kiwi line-up, including Die! Die Die!, Bang Bang Eche, Kingston, Motocade, Kidz In Space, David Dallas, and Smashproof. The show is FREE with RSVP, and you can check out videos and MP3s from all the bands at the RSVP page.

Surf City play again later Tuesday night at Cake Shop with ZZZ, Moi Non Plus and more ($8 without a badge) and then Wednesday (10/21) at The Bell House with Pete & The Pirates, Let's Wrestle, The Love Language, and Dawn Landes. ($14 without badge; advance tickets are available.) Surf City are also on the bill of the other free BrooklynVegan day party at Pianos that is happening on the afternoon of Saturday, October 24th (in partnership with Bowery Presents). Check the band's MySpace hopefully soon for full day party schedule.

All scheduled dates for Surfer Blood (who are also playing a bunch of dates with Art Brut including the November Brooklyn Bowl show) and Surf City, plus videos, below...