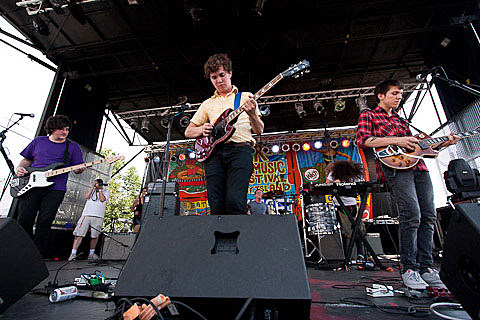 Since their big breakout at CMJ 2009, Florida's Surfer Blood haved played New York what seems like every other week. Their most recent NYC show was at Siren Fest.

On the opposite end are The Drums, who played New York a ton in 2009 and only once (minus a Record Store Day in-store and private parties) in 2010 (that show was in January, coincidentally, with Surfer Blood).

The two bands are pairing up for a September/October tour. That includes a show on Wednesday, October 20th at Webster Hall. Tickets go on AmEx presale Wednesday at noon. General sale Friday, July 30th at noon.

Another show on that tour brings Surfer Blood back to Grand Central in Miami where they swore never to play again...

"Let us rehash the night that Surfer Blood played Poplife's 11th anniversary party at Grand Central. The band members felt they had been disrespected by an overzealous security team and snobby promoters. So during their slot opening for the Pains of Being Pure at Heart, guitarist Thomas Fekete announced to the crowd, "Awesome venue, too bad it's run by a bunch of dicks. We will never play here again.""

That is being reported by the Village Voice's sister publication Miami New Times who forgot to mention that the booking is consistent with the Florida band's tendency for forgiveness. Not long after Surfer Blood publicly lashed out at the Voice for Rob Harvilla bashing them, they played the Village Voice's SXSW party, and then Siren too.

The Drums also have plenty of shows abroad booked, with summer gigs in New Zealand, Australia, Japan and Europe, and then more Euro shows in November & December. Surfer Blood's summer shows are similar (so similar, they share the bill on some dates).