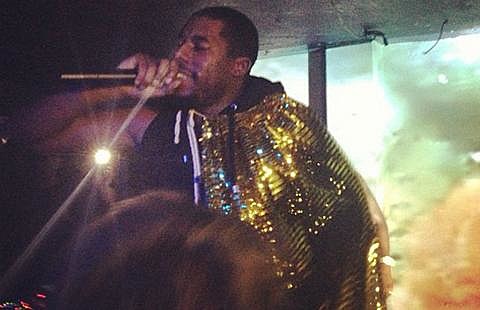 If you aren't already familiar with new rapper Captain Murphy, who first appeared on the Adult Swim single, "Between Friends" with Flying Lotus and Earl Sweatshirt, he had been keeping his identity concealed but many rumors circulated that Captain Murphy was the rapper alter ego of FlyLo himself, or a member of Odd Future. He released his impressive debut mixtape, Duality, as one long audio file in a video (which you can watch below) but has since released a deluxe edition with the tracks separated and bonus material, which you can download for free HERE. Most of the mixtape was produced by Flying Lotus and also included production from Brainfeeder producers Jeremiah Jae, Samiyam, and Teebs, plus hip hop production greats Madlib and Just Blaze, and a beat by upcoming duo TNGHT. The full tracklist is below.

If you've been following along with all the Captain Murphy insanity, you may know that he made his live debut last night (11/28) in LA at The Airliner. And as you can see in the picture above from the show, Captain Murphy is in fact Flying Lotus (via Complex). FlyLo has since taken to twitter to comment on the identity revealing.

Mixtape video and tracklist below...