We continue with JJ's report from Roadburn in Tilburg, Holland. If you missed it, you might want to start with Day One. Here is Day Two (Friday April 23, 2009)... 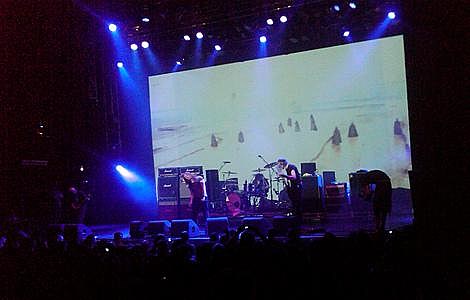 It's really easy to tell as you walk around Tilburg who is here for Roadburn and who isn't. Even when I first got here from Amsterdam on the train, the front of the station looked like an Eyehategod show could have broken out at any minute, all the bearded longhairs and black t-shirts, including my own, standing around looking for a bus or a cab. Like some kind of convention for the International Society Of Social Awkwardness. But oh, we do have a good time.

The thing about the "doom scene," as much as there is one, is that it's really more of a community. Maybe it's because the majority of its patrons are a little older, a little more stoned, a little more concerned with paying their rent, but there are way fewer scene rules than, say, in black metal, where the contest to be more kvlt than thou goes on ceaselessly. Certainly there's a uniform -- see "beards and t-shirts," above -- but there are some normal looking dudes running around here and no one really gives a crap one way or the other what they look like. I'd say it's refreshing, but it's been this way for as long as I've been into doom, so it's nothing new.

This is easily the best festival I've ever seen. The fact that I'm here still astonishes me. Yesterday, as I watched Angel Witch demolish bands half their age (though Saviours would answer back heartily later on), I couldn't help but look around me and be amazed at the gathering of riff worshippers. The Atomic Bitchwax, for example, played to a Green Room so packed that people were lined up into the hallway watching them through the open doors. I've seen the Bitchwax plenty of times in our shared home state of New Jersey, and most of those shows have been relatively empty. Here you can barely go from one part of the venue to the next without doing a bump 'n grind on some poor schlub. It's something to get used to, but I made a conscious decision to take a different approach to day two than I had to day one.

Mostly by that I mean less beer, but it also dawned on me sometime yesterday afternoon that on Thursday I think I watched one complete set, Orange Goblin's. The rest of the time I spent going back and forth between the different rooms, which is cool, because you get a taste of everything, but with the shortest of the set times being an hour, everyone gets to play more songs than they might at another festival. Yesterday's lineup called for a less manic approach, with the aforementioned Angel Witch and Bitchwax, as well as Cathedral, Saint Vitus, Colour Haze and Church of Misery commanding complete and mostly undivided attention. Of course that means I missed out on acts like Roadsaw and only got a sampling of Vibravoid's noise-laden psychedelia, but the tradeoff is a complete concert experience. Several. And really good ones at that.

I arrived at 013 and walked in on Bohren und der Club of Gore, who were droning out under a single spotlight, going for that lamp-on-the-stage intimacy probably better suited to a small club than a headliner stage the size of the one here, but they sounded good. Romanian black metallers Negurå Bunget, about whom I'll willingly admit my prior ignorance, were amazing in an Opeth-meets-Enslaved-plus-folk-instruments-and-massive-drum-jams kind of way. Needless to say, I hit their merch table shortly thereafter, picked up two records and a shirt and will probably grab more today if they're still there. I'm officially a fan.

Angel Witch was on at the same time as Steve Von Till, who spent most of his set in the once again packed Green Room droning out in the fashion of his Harvestman project. I couldn't find a place to stand where I could actually see him, but as I'd been hoping for him to do more of his solo acoustic-type material to begin with, I didn't stick around and headed back into Angel Witch instead. Sometimes you just want to rock. It happens. Fortunately the Bitchwax weren't far off.

I knew I'd seen Mono somewhere before, but it wasn't until a new friend reminded me they toured with High on Fire that I was actually able to place the instrumental/ambient Japanese outfit. They scored huge ovations from the crowd and since the changeover time between them and Cathedral was a full half-hour, the transition wasn't even awkward at all.

From there on out, the main stage was where it was at. Cathedral, Saint Vitus and Colour Haze, in that order. Holy crap. Seriously, if it was just those three bands playing, this show would have sold out anyway. Top that off with Church of Misery in the Green Room an hour into Colour Haze's set and you've got a legend in the making. The initial mix for Cathedral's set was a bit off, and Lee Dorrian's vocals started out rough, but all was smoothed out by the third song. They graced the Roadburn faithful with a new cut, which Dorrian said wasn't really even finished yet, called "Open Mind Surgery" that comes from an album to be recorded not soon enough.

But great though they were, the night belonged to Saint Vitus and everyone knew it. I feel like my life is more complete for having seen them; as though I didn't even know it was missing, but a piece of my existence has been fulfilled. No shit, it was that righteous. Really easy to see why that band didn't last though. Guitarist Dave Chandler had a microphone in front of him the sole purpose of which seemed to be so he could interrupt Wino every time he spoke. Some ego clashing, methinks. Doesn't matter. If they're only going to reunite once or twice a decade at this kind of event anyway and they're willing to put up with each other for that length of time, I'll take it. You don't have to like each other, just be awesome. They played mostly Wino-era material, unsurprisingly, throwing in older cuts like "The Psychopath" and "Saint Vitus" for good measure. The anthem, "Born too Late," was the ideal closer. Fists pumped furiously as an entire generation who hadn't seen Vitus the first time around identified with the lyrics on a level the band probably never expected.

Over the years I've made no secret of my level of geekiness over Colour Haze guitarist Stefan Koglek's guitar tone as being my favorite of all time. I stood at the front of the crowd for their set, which began at midnight and ran until 01:45. They brought out a live sitar player and sat on the stage for a couple acoustic numbers and though the audience diminished somewhat as time went on -- especially as 01:00 neared and Church of Misery got going next door -- by the end of it, as they wished everyone a good night and a good weekend ahead, there was still a healthy number of people there. That afternoon I'd bought five CDs from the Elektrohasch table and I'll probably buy five more today. I still think they're one of the most underrated bands on the planet.

That said, when it got to be time for Church of Misery, I had to pull myself away. I've seen Colour Haze before, a couple years ago at the now-dormant Emissions from the Monolith festival, whereas Church of Misery was a new experience live.

As psychotic as the serial killers they write songs about, they ran through a monstrous set of landmark sludge and stoner doom. It was another immobilizingly crowded Green Room, but I pushed my way though on the balcony (fucking entitled Americans) until I could at least see some of what was going on. Sometimes being an imperialist dog has its advantages. This was definitely one. They killed, there's no other way to say it. If there's any band worth keeping my old ass up until 02:00 for, it's Church of Misery.

I caught a cab back to the Hotel Ibis with a couple of the dudes from Solace, who are playing Sunday at a show I don't know yet whether or not I can get into, and was up until shortly after 03:00 watching 28 Days Later, trying to teach myself to speak Dutch with the subtitles. Needless to say, it didn't go very well.

Saturday is [was] the Beyond the Pale festival, curated by Neurosis. I have no doubt that they'll deliver as always, and after Friday night, even if the whole thing goes to hell somehow, this trip is still a win. And no, that's not just the free Hotel Ibis breakfast talking, though that definitely didn't hurt either.